Heightening consumer awareness for advanced, high-tech safety features is being met with intensifying regulatory efforts led by global New Car Assessment Programs (NCAPs) to maximise driver, passenger and pedestrian safety. In recent years, evolving NCAP requirements have increased the uptake for radar sensors in OEM automotive fleets, and in the years ahead, radar-based functionality will expand far beyond the basic ultrasonic sensors enabling many of the parking-assist features available today in a subset of OEM fleets.

These NCAP requirements are putting pressure on Tier One suppliers and the growing number of Tier Two suppliers waiting in the wings to expand their radar technology expertise. This has imposed steep implementation challenges for Tier One/Two suppliers and other radar focused developers, and the adoption of these once premium radar-based safety features into mainstream production lines is fuelling a need for faster time to market.

This expansion of available frequencies enables up to 5GHz of sweep bandwidth where previously 24GHz narrowband radar systems were limited to 200MHz - a significant difference in available frequency width. This change translates to potentially 25x improvements in range resolution, greatly reduces how far apart objects need to be before they are distinguishable as distinctly separate objects, allowing better detection and tracking capabilities among tightly clustered, adjacent objects. The ability to discern between multiple objects (e.g. a vehicle and a pedestrian), becomes paramount for higher order, automated decision making based on the known movement patterns and attributes of these two ‘object’ classes. 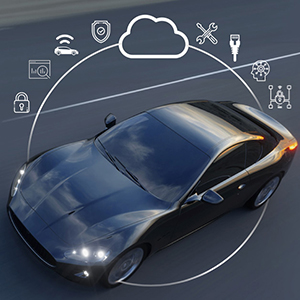 From a physics perspective, 77GHz allows the ability to improve radar range resolution and blind spot detection down to approximately five centimetres cross sections. With this 77GHz performance boost, applications like adaptive cruise control (ACC) and automatic emergency braking (AEB) can be vastly improved to expand radar ranges much farther than can be achieved at 24GHz.

At the radar data processing layer, hardware acceleration has emerged as a defining attribute among competing automotive grade processors at 77GHz, with significant implications for performance-per watt and thermal management. However, for the implementation of highly complex automotive radar applications – if you’re a supplier starting from scratch – hardware acceleration can require significant time and resource investments in algorithm development, while presenting a maze of other software development challenges.

With regard to radar system size and cost, 77GHz radar modules will likely allow for smaller form factors designed and built with smaller componentry – and presumably a comparably smaller bill of materials (BOM). The combined advantages of improved radar performance at smaller size and lower cost are hard to ignore.

But the evolution to 77GHz frequency-based automotive radar is simultaneously leaving some newer suppliers far behind their more established competitors, because this expertise can be very hard to come by for commercial applications. Expertise in high frequency radar technology has stemmed primarily from the military domain, and the pool of available experts in this field is understandably limited (and the military doesn’t exactly advertise how to build highly advanced radar systems).

A lot of suppliers have tried to be successful in radar, but very few have. It’s been estimated that approximately 80% of automotive radar systems are currently being provided by just four Tier Ones. With so many complex hardware and software disciplines and interdependencies in play at 77GHz frequency, the considerably larger pool of competing suppliers are increasingly looking to third party technology vendors to drive technology integration efforts in a manner that improves their workflow efficiencies and significantly accelerates development times. This effort comes at a time when OEMs are also accelerating their cadence for implementing this advanced radar functionality more broadly among their respective fleets.

Every supplier has their technology specialties, be it algorithm design or antenna development, etc., so their dependencies on third party technology parties can vary widely. If given the opportunity to leverage their own unique technology strengths and lean on third parties to fill in the gaps, suppliers would very likely take it – particularly if the third party support can be readily modelled to conform to the suppliers’ customers’ specific strengths and pain points.

However, this information isn’t always forthcoming from the OEMs to new suppliers – a major barrier to entry – and the OEMs require credible evidence up front that clearly spells out the intended trajectory of radar testing data from samples A, B to C. Only a small handful of Tier Ones can capably do this today, based largely on their incumbent market credibility and their established inroads into OEM design roadmaps.

However, OEMs want more radar purchasing options from the supplier market to grow the available ecosystem, and round-robin communication and collaboration between OEMs, suppliers and third party technology providers can help bolster the marketplace of solutions. In the end, suppliers need to provide real-world testing data up front to make the short list of contenders for OEM radar supply contracts. And as the pool of contenders grows, this data will be increasingly scrutinised in order to identify the credible players.

The industry needs a shortcut

To help overcome these challenges, NXP has teamed with Colorado Engineering (CEI) to provide an automotive grade reference design created to meet the stringent functional, safety and performance requirements inherent to 77GHz radar technology, with integrated hardware, software, and tools that greatly accelerate automotive radar design workflows. The solution is designed to spur the development and deployment of radar into mainstream production vehicles, and includes a full ecosystem of tools that aim to lower development costs while speeding time to market. It’s intended to provide a shorter path to 77GHz radar development – with the supporting real-world testing data that OEMs require – among suppliers who might otherwise be left behind as this technology evolves.

Ultimately, NCAP standards don’t dictate any single path to regulatory conformance. OEMs are free to select the technologies that best enable them to pass the requirements. 77GHz radar technology has emerged as a key enabling technology for NCAP conformance in the next few years, and it’s up to all of us – OEMs, suppliers, and third party technology providers – to accelerate the attendant technology evolution.