As the automotive industry moves forward with the concept of semi- and fully- autonomous vehicles, the diversity of complex and sensitive electronics-based systems increases significantly. For society, automation promises to make our roads safer, with fewer accidents, and to ease traffic congestion proactively. Mouser’s Mark Patrick explains.

Autonomy requires multiple high-performance interconnected sensors and subsystems to operate reliably and safely. The electrically demanding and noisy environment of an electric or hybrid vehicle complicates the potential technical challenges further. The potential for systems to disrupt the operation of other vital systems, from internal sources such as EMI, transients, and external influences, such as roadside C2X infrastructure is significant.

Advanced driver assistance systems (ADAS) form the bedrock of a vehicle’s autonomous capability, working together with more sophisticated and complex applications when fully autonomous. They also directly inform the driver of impending situations when operating in any semi-autonomous mode (Level 1 - Level 3). The different automation levels of a vehicle are illustrated in Figure 1.

Above: Figure 1. Vehicle automation levels, as defined by the Society of Automotive Engineers. (Source: SAE)

This article highlights the architecture of advanced autonomous vehicle sensing systems and the protocols and interfaces used to move data around a vehicle’s subsystems. We investigate the sources of interference and propose techniques to mitigate the impact such unwanted signals might have on a vehicle’s safe operation.

Systems architecture of an autonomous vehicle

In an autonomous vehicle, the electronic driver’s eyes and ears are a myriad of different sensors - see Figure 2. All are networked to a central computer system responsible for safely navigating the vehicle in any driving situation.

Sensors include long-range RF radar to detect vehicles, pedestrians, other moving objects a long distance ahead of the vehicle, and a video subsystem with a machine learning convolutional network to detect pedestrians, road signs, and lane departure. Other sensors include a 360-degree video camera system for the vehicle’s situational awareness regarding surrounding moving or stationary objects. To precisely know the vehicle’s location at all times, a high-performance GNSS navigation yields centimetre-level positional accuracy and dead-reckoning capabilities when the vehicle enters urban canyons typical in cities or driving through tunnels.

Reliable and robust networking protocols CAN and Ethernet interconnect subsystems with an acceptable (<5ms) latency level. Increasingly, the trend for video and radar subsystems is that they also include machine learning inference engines to detect and classify objects at the point of detection rather than placing additional compute workload on the central system. This approach also reduces the real-time latency overhead, a critical design consideration for a vehicle moving at over 30m/s (70mph/112kph). Latency impacts timely decision making and prohibits using cloud connectivity for any real-time driving task. For example, a 4G cellular network has a typical round-trip latency of 60 milliseconds and will travel 1.8 metres based on the above speed. FlexRay and LIN are two other automotive networking protocols in widespread use. 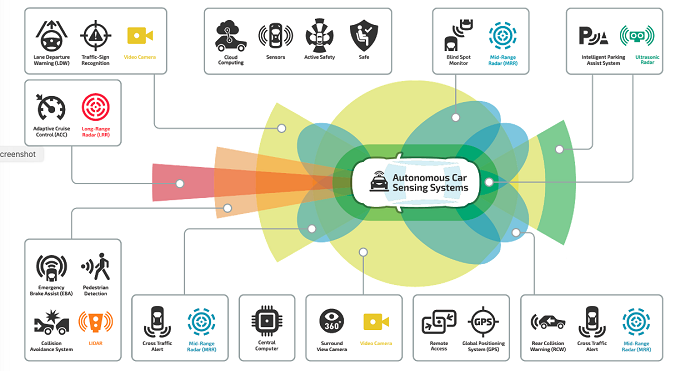 For the vehicle’s infotainment and video transmission requirements, HD BaseT is emerging as a viable networking protocol. Combining the best of HDMI and Ethernet, HDBaseT uses a single cable to converge audio, video, Ethernet, 100W of power-over-Ethernet (PoE), system controls, and USB. Optimised for use in different domains, the automotive protocol recommends using a single unshielded pair for linking devices up to 15m. Integrating the different transmission elements into one cable also saves considerable cable weight, installation labour, and material cost.

For an autonomous vehicle to operate safely and reliably, all the interconnected and interdependent systems need to operate continuously and faultlessly. If a sensor begins to fail or the subsystem monitoring circuitry detects sub-par performance, an immediate alert to the central computer to instigate a fail-safe stop must be issued.

Technical challenges and how to reduce their impact

The electronic sensors and associated subsystems utilise highly sophisticated analogue and digital components to function. Such devices are susceptible to disturbance from electrical transients, electromagnetic interference (EMI), and electrical static discharge (ESD). Transients occur on power supply rails due to fast dV/dt switching and create voltage spikes many times greater than the nominal supply voltage. High power electric motors and other inductive loads can cause rapid surge transients to occur during operation. The drive chain associated with an electric vehicle is undoubtedly a source of transients.

However, smaller motors used for electric steering, comfort and body controls, and electric park brakes can also create significant transients. Transients can enter a subsystem either conducted along common power rails or be induced in adjacent cables such as those connecting sensors to the subsystems or the subsystems network connection to the central computer. Without adequate protection, transients can cause microprocessors to reset, to lock-up, or, in extreme cases, physically damage critical components. 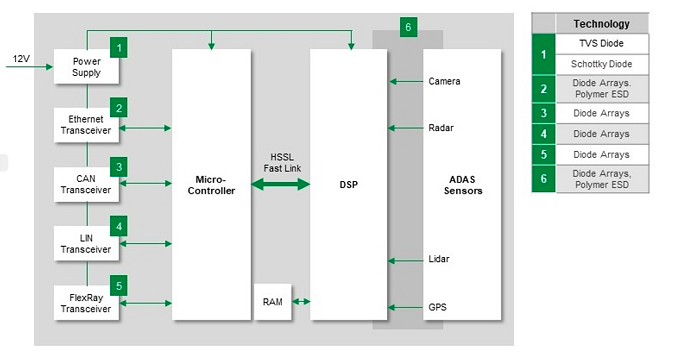 Above: Figure 3. ADAS Communication and Control Sub-system and the need for protection devices. (Source: Littelfuse)

Likewise, induced EMI can cause unpredictable and erratic system behaviour and can come from various sources, including wireless access points and smartphones. Again, protection is required to prevent EMI of a significant magnitude disrupting the operation of a critical system.

Static discharge is of enormous concern to sensitive electronic components. They need special handling throughout the supply chain and during production, but they also need protection in the end circuit. Like transients, static discharge causes massive voltage spikes and may result from a build-up of energy from road friction with rubber tyres and human contact with fabrics. Vehicles operating in regions of low humidity are also susceptible to static electricity.

Figure 3 highlights the major functional blocks of an ADAS communication and control subsystem, including the protection devices that should be employed. Each communication link (2, 3, 4, and 5) requires transient and ESD protection that suits each protocol’s electrical specifications and data rates. The fastest protocol is Ethernet, with a bit rate typically in the range of 100Mbps to 10Gbps. For high-speed differential Ethernet interfaces, the recommended ESD and transient surge protection methods include using a polymer ESD suppressor such as the AEC-Q200 qualified Littelfuse AXGD Xtreme-Guard series.

Figure 4 illustrates where an AXGD series device is placed in the Ethernet connection from a differential twisted pair to the Ethernet PHY. With a fast response time and capable of absorbing up to 50A transients up to 30kV, the AXGD series protects a differential pair in a single package. Also, with an extremely low capacitance value, the ESD protection does not impact Ethernet data rates up to 1Gbps.

For the CAN transceiver interface, diode arrays are recommended for protection from fast transients and ESD. Figure 5 illustrates the use of a diode array, the Littelfuse AQ24CANA series. Another example of a zener diode-based transient voltage suppression (TVS) diode includes the Littelfuse SZ1SMB series 600W TVS diode. Ideally used in power supplies such as Item 1 in Figure 3, the SZ1SMB series has excellent clamping capabilities, a fast response time, and can absorb high surge transients.

When selecting transient and ESD components to protect automotive electronic systems, an appreciation of the applicable international standards is recommended - the three most essential ISO standards, ISO7637-2, ISO16750-2, and ISO10605:2008. In addition to these standards, the Automotive Electronics Council (AEC) devised a series of quality standards that define the mechanical, electrical, and environmental stress criteria for components used in automotive electronic systems. Relevant standards include AEC-Q101 for discrete components such as semiconductors and diodes and AEC-Q200 for passive components such as capacitors, resistors, and inductors.

Protecting the electronic systems of autonomous vehicles from the effects of transients, EMI, and ESD is paramount to ensure continuous, reliable, and faultless operation. Autonomous vehicles promise to significantly reduce traffic congestion and make our roads safer for drivers, passengers, and pedestrians. With the use of surge and static protection components, designers will have the confidence that their systems will be robust enough to survive any unwanted electrical disturbances.