The recent shootings in Dallas saw US police forces utilise a robot in a show of lethal force for the first time in history. Could this be a watershed moment in the development and deployment of autonomous policing? Electronic Specifier Editor Joe Bush investigates.

The use of robotics in military scenarios is certainly nothing new. The ‘father of radio control’ John Hays Hammond Jr patented methods for wireless control of military ships way back in 1910, and as far back as World War II the Wehrmacht were utilising remote controlled tanks in the form of the Leichter Ladungsträger Goliath.

In addition, although drones are fast becoming commonplace in a whole host of well-documented commercial applications, in the military theatres of the world their use can be traced back to the Cold War in the form of the intelligence gathering MQB-1 Predator drone.

When you consider that autonomous military vehicles have the capacity to replace human beings in life threatening situations, taking people out of harm’s way, then their advantages are obvious. Robots have been used in a number of hazardous scenarios such as deep sea salvation and in particular, bomb disposal – allowing so-called ‘bomb doctors’ to closely examine potentially explosive devices from a safe distance.

There have also been developments in the form of autonomous fighter jets and bombers which have the advantages of requiring little, if any, operator training or life support systems, plus greater maneuverability. And of course, the loss of an autonomous plane does not mean the loss of a pilot. For many though, robot soldiers/vehicles are still limited to high-tech military applications and, in terms of law enforcement agencies using robotics (for anything other than bomb disposal), the idea is still very much entrenched in science fiction in the form of hit movies such as ‘Terminator’ and ‘Robocop’. However, this may be about to change with recent incidents of police robots being used against people – something that could well be a watershed moment in the use of robotics in law enforcement.

Colin Rogers, a former Police Inspector who is now a Professor of Police Sciences at the University of South Wales commented: “One of the biggest influences on policing over the past 30 years or so has been the introduction of technology. There has always been a drive to introduce new technology into the world of policing even from the earliest days, but this has increased dramatically of late.”

There is a huge difference between military operations and law enforcement in terms of dealing with the enemy, and potential suspects. However, mass shootings are reaching epidemic proportions in the US and the tragic events in Dallas in July (which saw several police officers shot dead and others injured) marked what most experts believe to be the first occasion in history where a police force has utilised a robot in a show of lethal force. This had previously been limited purely to military applications. The ANDROS MarkV-A1 is a remote controlled robot that is primarily designed for military, explosive ordnance disposal (EOD), and law enforcement or SWAT applications, and in Dallas it was equipped with an explosive device on its manipulator arm which it used to kill a suspect – on a night when the lives of police officers were at greater risk than usual, the authorities believed that any other option would have placed officers in even greater peril.

Other experts have been critical however, claiming the decision to use the robot was arrived at all too quickly and now raises a number of other issues around legality and ethics. For example, when deadly force is applied by police officers in the US, it is judged in terms of the immediate threat to officers and others as outline by the Fourth Amendment. But how should that apply when the threat is to a robot?

With ‘Pandora’s Box’ having, effectively, been opened, this is unlikely to be the first and last incident of police robots being used in a show of lethal force, so the incident has major technological and legal implications for 21st century policing. Speaking to CBS News following the shootings, Peter Asaro, Co-founder of the International Committee for Robot Arms Control, commented: “It raises a lot of concern about the increased weaponisation of robots that the police use. Once, I think, police departments have these kinds of weapons in their arsenal, it provides the opportunity to use them in a lot of different kinds of scenarios.”

In addition, in terms of the tools with which the police may administer lethal force, a gun may misfire but it can’t be hacked. So the issue of security will be vital as autonomy becomes more integral to law enforcement agencies. There have already been instances of autonomous cars and drones being hacked by third parties, so a police robot would certainly be vulnerable and security measures will need to be developed to counter that threat.

Early deployments
Although it may seem fanciful to some, the truth is that robotic cops may be patrolling the streets sooner rather than later – indeed last year the use of armed drones was legalised in North Dakota as long as they are equipped with ‘less than lethal’ weaponry i.e. tear gas, rubber bullets, pepper spray and tasers. Robots such as the Telebot, developed by Florida International University’s Discovery Lab, has also been field tested and is controlled remotely by a person wearing an Oculus Rift headset and motion-tracking vest, arm bands and gloves – with the voice of the operator transmitted through the robot. 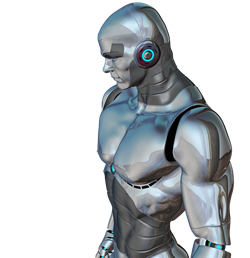 One school of thought is that these Telebot’s will play a vital role in helping disabled officers and veterans get back to work, however others claim that these intimidating looking robots are just another step towards a dystopian future where we have autonomous robots carrying out law enforcement that are incapable of human judgement and emotions such as compassion, empathy and dignity. In another big brother-esque scenario, a fully autonomous robot, the Knightscope K5, has already been developed and serves as a total surveillance machine that can record people’s actions and conversations in public places. The K5 uploads a stream to a security network and the robots are already being deployed in malls and office buildings as security assistants.

A similar device has been developed by China’s National Defense University to enhance the country’s anti-terrorism and anti-riot measures. A controversial feature of the AnBot is its taser-like electrically charged riot control tool and, although the tool can only be fired by a remote human operator, the size of the AnBot means that it can be mounted with other law enforcement equipment such as tear gas.

Understandably there has been concern around the advances in autonomous weapons which some have described as the third revolution in warfare, after gunpowder and nuclear arms. And what if they were to fall into the wrong hands of terrorists, dictators and warlords? Also a concern would be their reliability and fallibility. Only recently three restaurants in China were forced to ‘sack’ their robot waiters due to their incompetence and inability to perform fairly mundane tasks. A robot that spills the soup, while no doubt inconvenient, is not a matter of life and death, whereas the consequences of a robot failing to perform in a military or law enforcement scenario could be catastrophic.

The UK
While robotic bobbies may still be some way off in the UK, that doesn’t mean that police forces at home are not embracing technology in their fight against crime. The police forces of Sussex and Surrey are already trialling the use of UAVs to track burglars, film protests, and at the scenes of accidents. Two years ago, a TechUK event unveiled the ‘officer of the future’ which highlighted the types of technology that could be available to the next generation of police officers such as small body worn cameras; wearable computers which could provide officers with quick access to intelligence such as tweets or photos being posted in the nearby area; power generation/exoskeletons which can make officers stronger and more resilient by amplifying the muscles in the legs and feet; the use of graphene which is stronger and lighter than steel; and digital eyewear featuring Google Glass – which is capable of taking photos, recording video and playing sound. Officers could also use the glasses to access maps of escape routes from a crime scene or to view YouTube videos of a protest.

While these technologies will undoubtedly aid officers in doing their jobs faster and more efficiently, some have sounded a note of caution. Many people these days lament the decline of the English ‘bobby on the beat’ and there have been vociferous calls for police officers to be more visible within their communities. However, the addition of all this new technology has led some to argue that it would harden the appearance of the UK police forces, giving them an almost paramilitary look that would ultimately lead to a disengagement with the community.

This is a view that was echoed across the pond last year when President Barack Obama addressed the issue: “We’ve seen how militarised gear can sometimes give people a feeling like there’s an occupying force, as opposed to a force that’s part of the community that’s protecting and serving them. It can alienate and intimidate local residents, and send the wrong message.”

Summary
Without doubt the Dallas tragedy has led to some soul searching in the US as it could be a game changer in the role of law enforcement in society, and it’s an issue that clearly transcends technology into the wider issues of ethics, regulation and legislation. Rogers added: “Technology has of course proved its worth on many occasions, but there needs to be some deeper consideration regarding its blanket acceptance as a means for ‘good’. The introduction of for example, robots or drones, whilst having usefulness for some police activity, may be seen as being ‘Orwellian’ in nature and provide unwarranted surveillance and the intrusion of the rights of individuals. This kind of use is clearly not compatible with the democratic model of policing.

“In addition, policing is situational. By that I mean it is carried out in different ways in different countries and there may be different ideas regarding the accepted use of such technology. The decision in America recently to utilise a robotic machine to blow up a suspect believed to have shot several police officers may at first seem a sensible move and there may have been very good reasons why it was used in this way. However, some may think that an alternative approach would have been better, such as trying to ‘starve’ the suspect out, or even try further negotiations, etc., as justice should be seen to be delivered by the courts.

“The point I am trying to make applies to all technology as well as robotics when it comes to their use by the police. The problem might lie not in the use of robotic technology, but in its application by police agencies in certain situations which is a subtle difference. Accountability and transparency for the use of such technology must be a vitally important part of its use.

“Despite concerns such as these and in part fuelled by recent austerity measures and the need for more economy, efficiency and effectiveness amongst most police agencies, there is a willingness to increase the use of technology, including the use of robotics and this will probably increase. Policy makers and planners however, should be aware of the possible consequences of damage to police/community relationships.”