Some exoplanets shine brighter than others in the search for life beyond the solar system. NASA research proposes a novel approach to sniffing out exoplanet atmospheres. It takes advantage of frequent stellar storms—which hurl huge clouds of stellar material and radiation into space—from cool, young dwarf stars to highlight signs of habitable exoplanets.

Traditionally, researchers have sought potential biosignatures as ways of identifying inhabited worlds: byproducts from life as we know it such as oxygen or methane that over time accumulate in the atmosphere to detectable amounts.

But with current technology, according to Vladimir Airapetian, lead author of a study published in Scientific Reports, identifying these gases on distant terrestrial exoplanets is time-consuming, requiring days of observation time. The new study suggests hunting for cruder signatures of potentially habitable worlds instead, which would be easier to detect with current resources in less time.

"We're in search of molecules formed from fundamental prerequisites to life—specifically molecular nitrogen, which is 78% of our atmosphere," said Airapetian, who is a solar scientist at NASA's Goddard Space Flight Center in Greenbelt, Maryland, and at American University in Washington, D.C. "These are basic molecules that are biologically friendly and have strong infrared emitting power, increasing our chance of detecting them."

Present life on Earth tells Airapetian and his team of researchers they should look for atmospheres rich with water vapor and nitrogen, and oxygen, the product of life. Oxygen and nitrogen free-float stably in their molecular form—that is, two atoms of either oxygen or nitrogen bound together in one molecule. But in the vicinity of an active dwarf star, extreme space weather sparks distinct chemical reactions, which researchers can use as indicators of atmospheric composition.

Stars like our Sun are turbulent in their adolescence and frequently produce powerful eruptions that fling stellar particles ahead of them to near-light speeds. Unlike our Sun, some yellow and most orange stars—which are a bit cooler than the Sun—may continue to produce these strong stellar storms for billions of years, generating frequent swarms of high-energy particles.

When these particles reach an exoplanet, they flood its atmosphere with enough energy to break molecular nitrogen and oxygen into individual atoms, and water molecules into hydroxyl—one atom each of oxygen and hydrogen, bound together.

From there, the reactive nitrogen and oxygen atoms spark a cascade of chemical reactions that ultimately produce what the scientists call atmospheric beacons: hydroxyl, more molecular oxygen, and nitric oxide—a molecule made of one nitrogen and one oxygen atom.

Airapetian and his colleagues used a model to calculate just how much nitric oxide and hydroxyl would form and how much ozone would be destroyed in an Earth-like atmosphere around an active star.

Earth scientists have used this model for decades to study how ozone—which forms naturally when sunlight strikes oxygen—in the upper atmosphere responds to solar storms, but it found a new application in this study; Earth is, after all, the best case study available in the search for life.

Using a computer simulation, the researchers exposed the model atmosphere to the space weather they'd expect from a cool, active star. They found that ozone drops to a minimum and fuels the production of atmospheric beacons.

For researchers, these chemical reactions are very useful. When starlight strikes the atmosphere, spring-like bonds within the beacon molecules absorb the energy and vibrate, sending that energy back into space as heat, or infrared radiation. 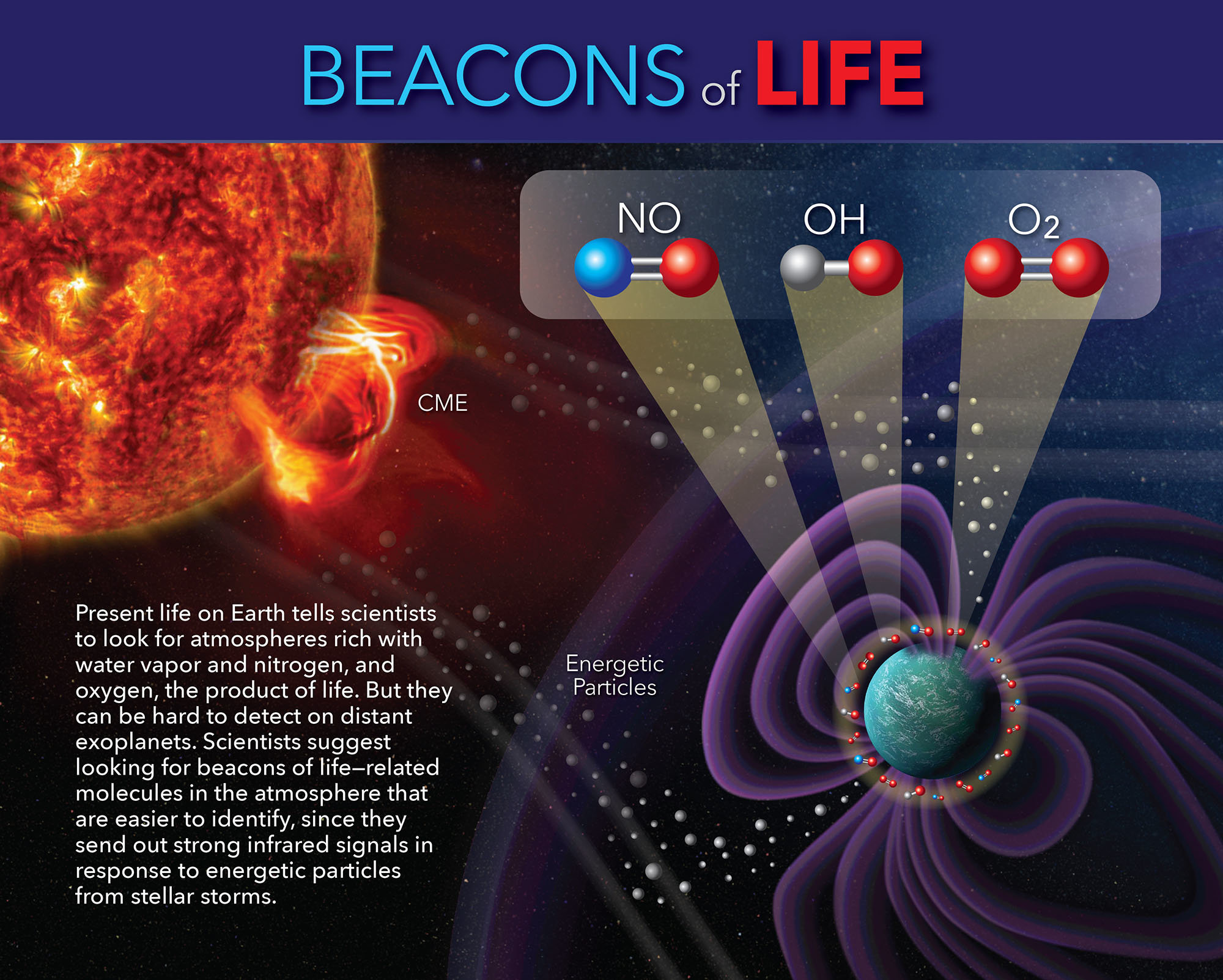 Scientists know which gases emit radiation at particular wavelengths of light, so by looking at all the radiation coming from the atmosphere, it's possible to get a sense of what's in the atmosphere itself.

Forming a detectable amount of these beacons requires a large quantity of molecular oxygen and nitrogen. So, if they are detected, these compounds could indicate an atmosphere filled with biologically friendly chemistry, as well as Earth-like atmospheric pressure—and thus the possibility of a habitable world, one needle in a vast haystack of exoplanets.

This approach is also meant to weed out exoplanets without an Earth-like magnetic field. "A planet needs a magnetic field, which shields the atmosphere and protects the planet from stellar storms and radiation," Airapetian said.

"If stellar winds aren't so extreme as to compress an exoplanet's magnetic field close to its surface, the magnetic field prevents atmospheric escape, so there are more particles in the atmosphere and a stronger resulting infrared signal."

Airapetian and his colleagues used data from NASA's Earth-studying TIMED mission—short for Thermosphere Ionosphere Mesophere Energetics Dynamics—to simulate how infrared observations of these beacons might appear.

The data came from TIMED's spectroscopy instrument called SABER—short for Sounding of the Atmosphere using Broadband Emission Radiometry—which studies the very same chemistry that generates the atmospheric beacons, as it occurs in Earth's upper atmosphere in response to solar activity.

"Taking what we know about infrared radiation emitted by Earth's atmosphere, the idea is to look at exoplanets and see what sort of signals we can detect," said Martin Mlynczak, a co-author of the paper and the SABER associate principal investigator at NASA's Langley Research Center in Hampton, Virginia. "If we find exoplanet signals in nearly the same proportion as Earth's, we could say that planet is a good candidate for hosting life."

The SABER data showed the frequency of intense stellar storms is directly related to the strength of the heat signals from the atmospheric beacons. With more storms, more beacon molecules are generated and the infrared signal would be strong enough, the scientists estimate, to be observed from nearby exoplanets with a six to 10-meter space-based telescope in just two hours of observation time.

"This is an exciting new proposed way to look for life," said Shawn Domagal-Goldman, a Goddard astrobiologist not connected with the study. "But as with all signs of life, the exoplanet community needs to think hard about context. What are the ways non-biological processes could mimic this signature?"

With the right kind of star, this work could lead to new strategies in the search for life that identify not just potentially habitable planets, but planetary systems, as the way a planet's atmosphere interacts with its parent star also has a key effect on its habitability.

If promising signals are detected, researchers can coordinate observations with a future space-based observatory such as NASA's James Webb Space Telescope, increasing the likelihood of discovering such a potential system.