From launch to orbit

Launched nearly five years ago on 5th August, 2011, from Cape Canaveral, Florida, NASA’s solar-powered spacecraft, ‘Juno’, has crossed the four largest Galilean moons of Jupiter (eponymously named after Galileo Galilei who discovered them in 1609) and has reached its destination; Jupiter. Follow Juno's mission from launch to orbit below.

"The bow shock is analogous to a sonic boom," said William Kurth of the University of Iowa in Iowa City, lead co-investigator for the Waves investigation. "The solar wind blows past all the planets at a speed of about a million miles per hour, and where it hits an obstacle, there's all this turbulence."

The obstacle is Jupiter's magnetosphere, which is the largest structure in the solar system.

"If Jupiter's magnetosphere glowed in visible light, it would be twice the size of the full moon as seen from Earth," Kurth said. 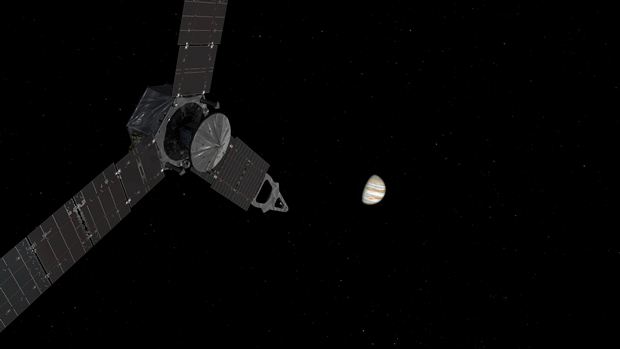 Out in the solar wind a few days ago, Juno was speeding through an environment that has about 16 particles per cubic inch (one per cubic centimeter). Once it crossed into the magnetosphere, the density was about a hundredfold less. The density is expected to climb again, inside the magnetosphere, as the spacecraft gets closer to Jupiter itself. The motions of these particles traveling under the control of Jupiter's magnetic field will be one type of evidence Juno examines for clues about Jupiter's deep interior.

While this transition from the solar wind into the magnetosphere was predicted to occur at some point in time, the structure of the boundary between those two regions proved to be unexpectedly complex, with different instruments reporting unusual signatures both before and after the nominal crossing.

"This unusual boundary structure will itself be the subject of scientific investigation," said Barry Mauk of the Johns Hopkins University Applied Physics Laboratory, Laurel, Maryland, who is the instrument lead for the Jupiter Energetic-Particle Detector Instrument (JEDI) on Juno.

4th July, 12:15hrs (PDT): Mission controllers transmit command product "ji4040" into deep space, to transition the solar-powered Juno spacecraft into autopilot. It will take nearly 48 minutes for the signal to cover the 534-million-mile (860-million-kilometer) distance between the Deep Space Network Antenna in Goldstone, California, to the Juno spacecraft.

"Ji4040 contains the command that starts the Jupiter Orbit insertion sequence," said Ed Hirst, Mission Manager of Juno from NASA's Jet Propulsion Laboratory in Pasadena, California. "As soon as it initiates -- which should be in less than a second - Juno will send us data that the command sequence has started."

Juno’s orbit-insertion phase (JOI): The spacecraft will perform a series of steps in preparation for a main engine burn that will guide it into orbit.

4th July, 18:16hrs (PDT): Juno begins to turn slowly away from the sun and toward its orbit-insertion attitude

4th July, 19:41hrs (PDT): Juno switches to its low-gain antenna. Fine-tune adjustments are then made to the spacecraft's attitude.

4th July, 19:56hrs (PDT): The spacecraft spins up from 2 to 5 revolutions per minute (RPM) to help stabilise it for the orbit insertion burn.

4th July, 20:18hrs (PDT): Juno fires its main engine, beginning a 35 minute burn that will place it into orbit around Jupiter. This will slow it enough to be captured by the giant planet's gravity. The burn will impart a mean change in velocity of 1,212mph (542 metres a second) on the spacecraft.

It is performed in view of Earth, allowing its progress to be monitored by the mission teams at NASA's Jet Propulsion Laboratory in Pasadena, California, and Lockheed Martin Space Systems in Denver, via signal reception by Deep Space Network antennas in Goldstone, California, and Canberra, Australia.

After the main engine burn, Juno will be in orbit around Jupiter. The spacecraft will spin down from 5 to 2RPM, turn back toward the sun, and ultimately transmit telemetry via its high-gain antenna. 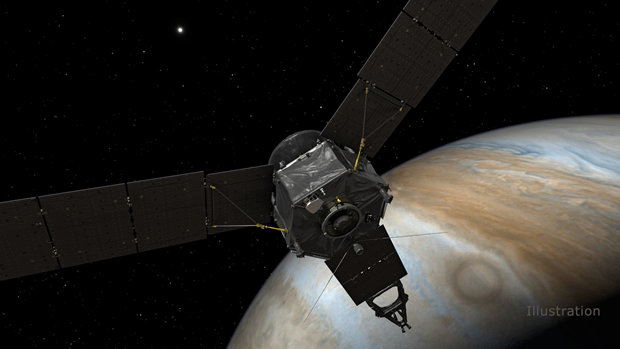 Image: This illustration depicts NASA's Juno spacecraft at Jupiter, with its solar arrays and main antenna pointed toward the distant sun and Earth. Image Credit: NASA

Juno has reached its destination

Confirmation of a successful orbit insertion was received from Juno tracking data monitored at the navigation facility at NASA's Jet Propulsion Laboratory (JPL) in Pasadena, California, as well as at the Lockheed Martin Juno operations centre in Denver. The telemetry and tracking data were received by NASA's Deep Space Network antennas in Goldstone, California, and Canberra, Australia. 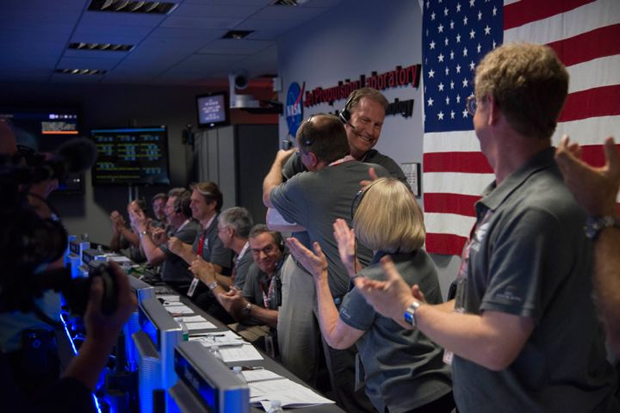 “This is the one time I don’t mind being stuck in a windowless room on the night of the Fourth of July,” said Scott Bolton, Principal Investigator of Juno from Southwest Research Institute in San Antonio. “The mission team did great. The spacecraft did great. We are looking great. It’s a great day.”

“The spacecraft worked perfectly, which is always nice when you’re driving a vehicle with 1.7 billion miles on the odometer,” said Rick Nybakken, Juno Project Manager from JPL. “Jupiter orbit insertion was a big step and the most challenging remaining in our mission plan, but there are others that have to occur before we can give the science team members the mission they are looking for.” Over the next few months, Juno’s mission and science teams will perform final testing on the spacecraft’s subsystems, final calibration of science instruments and some science collection.

“Our official science collection phase begins in October, but we’ve figured out a way to collect data a lot earlier than that,” said Bolton. “Which when you’re talking about the single biggest planetary body in the solar system is a really good thing. There is a lot to see and do here.” Juno's principal goal is to understand the origin and evolution of Jupiter. With its suite of nine science instruments, Juno will investigate the existence of a solid planetary core, map Jupiter's intense magnetic field, measure the amount of water and ammonia in the deep atmosphere, and observe the planet's auroras. The mission also will let us take a giant step forward in our understanding of how giant planets form and the role these titans played in putting together the rest of the solar system. As our primary example of a giant planet, Jupiter also can provide critical knowledge for understanding the planetary systems being discovered around other stars.

The Tour: Juno starts its tour of Jupiter in a 53.5-day orbit
The spacecraft saves fuel by executing a burn that places it in a capture orbit with a 53.5-day orbit instead of going directly for the 14-day orbit that will occur during the mission's primary science collection period. The 14-day science orbit phase will begin after the final burn of the mission for Juno's main engine on 19th October.

During its mission of exploration, Juno will circle the Jovian world 37 times, soaring low over the planet's cloud tops -- as close as about 2,600m (4,100 km). During these flybys, Juno will probe beneath the obscuring cloud cover of Jupiter and study its auroras to learn more about the planet's origins, structure, atmosphere and magnetosphere.

Juno's name comes from Greek and Roman mythology. The mythical god Jupiter drew a veil of clouds around himself to hide his mischief, and his wife, the goddess Juno, was able to peer through the clouds and reveal Jupiter's true nature.

Magnetic field study
Coming face-to-face with the gas giant, Juno will begin to unravel some of the greatest mysteries surrounding our solar system's largest planet, including the origin of its massive magnetosphere.

In order to look inside the planet, the science team equipped Juno with a pair of magnetometers. The magnetometers, which were designed and built by an in-house team of scientists and engineers at NASA's Goddard Space Flight Center in Greenbelt, Maryland, will allow scientists to map Jupiter's magnetic field with high accuracy and observe variations in the field over time.

However, the sensor orientation changes in time with the mechanical distortion of the solar array and boom resulting from the extremely cold temperatures of deep space. This distortion would limit the accuracy of the magnetometer measurements if not measured.

To ensure that the magnetometers retain their high accuracy, the team paired the instruments with a set of four cameras. These cameras measure the distortion of the magnetometer sensors in reference to the stars to determine their orientation. 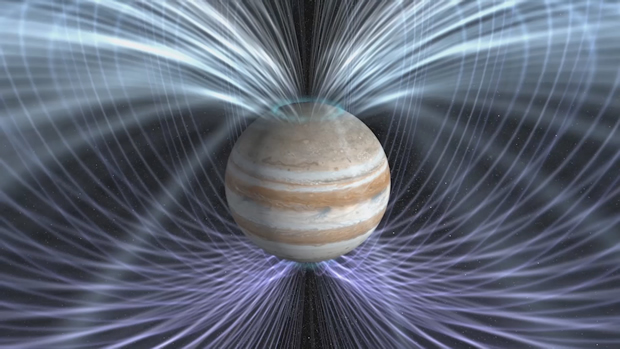 Image: Scientists will use the twin magnetometers aboard NASA's Juno spacecraft to gain a better understanding about how Jupiter's magnetic field is generated. Credit: NASA

"This is our first opportunity to do very precise, high-accuracy mapping of the magnetic field of another planet," Connerney said. "We are going to be able to explore the entire three-dimensional space around Jupiter, wrapping Jupiter in a dense net of magnetic field observations completely covering the sphere."

Magnetic fields are produced by what are known as dynamos - convective motion of electrically conducting fluid inside planets. As a planet rotates, the electrically susceptible liquid swirls around and drives electric currents, inducing a magnetic field. Earth's magnetic field is generated by liquid iron in the planet's core.

"But with Jupiter, we don't know what material is producing the planet's magnetic field," said Jared Espley, Juno program scientist for NASA Headquarters, Washington. "What material is present and how deep down it lies is one of the questions Juno is designed to answer."

The observations made by Juno's magnetometers will also add to our understanding of Earth's dynamo, the source of our planet's magnetic field, which lies deep beneath a magnetised layer of rocks and iron.

Imagine Earth's crust strewn with refrigerator magnets as you try to peer beneath the surface to observe the dynamo. The magnetization of Earth's crust will skew your measurements of the magnetic field.

"One of the reasons that the Juno mission is so exciting is because we can map Jupiter's magnetic field without having to look through the crustal magnetic fields, which behave like a jumble of refrigerator magnets," Connerney said. "Jupiter has a gaseous envelope about it made of hydrogen and helium that gives us a clear and unobstructed view of the dynamo."

These observations will also add to the general understanding of how dynamos generate magnetic fields, including here on Earth.

"Any time we understand anything about another planet, we can take that knowledge and apply it to our knowledge about our own planet," Espley said. "We'll be looking at Juno's observations in a big-picture perspective."

‘Destination: Juno’
NASA has announced a collaboration with Apple that will serve to enhance the agency's efforts to inform and excite the public about dramatic missions of exploration like Juno. ‘Destination: Juno’ is a synergy between two seemingly disparate worlds: popular music and interplanetary exploration. The works resulting from this collaboration showcase exploratory sounds from artists who have been inspired by Juno and other NASA missions, including Brad Paisley, Corinne Bailey Rae, GZA, Jim James featuring Lydia Tyrell, QUIÑ, Trent Reznor & Atticus Ross, Weezer and Zoé.

Apple has captured moments in this journey with a behind-the-scenes documentary spearheaded by the Juno mission's principal investigator, Scott Bolton, and scored by Academy Award winners Trent Reznor and Atticus Ross. The content is available on various Apple platforms. Other Juno-related content, including educational opportunities with Bill Nye on and an ‘Interactive Guide to NASA's Juno Mission’, will roll out over the course of a year and throughout the length of the Juno mission.