An experiment to tidy up outer space

An experimental project has been launched by UK scientists at the Defence Science and Technology Laboratory (Dstl) to tackle the growing problem of space junk. Hundreds of thousands of man-made objects orbit the Earth, but fewer than 5,000 are operational satellites. The most congested area sits within 2,000km of the Earth’s surface, known as low Earth orbit (LEO), where collisions can cause further debris.

If this problem is not addressed, space junk threatens to make space exploration and satellite launches impossible. It also poses a hazard to existing satellites, which make an important contribution to the UK’s military capability.

To tackle this problem, the Inter-Agency Space Debris Coordination Committee (IADC) has proposed that all LEO satellites should be de-orbited within 25 years.
However, the traditional de-orbiting rocket method is expensive. As part of a large collaboration with industry, government and academia, Dstl space scientists are exploring alternative methods.

The Daedalus experiment (part of the Space Situational Awareness Project in Dstl’s Space Programme) is exploring the effect on satellites of so-called Icarus ‘de-orbit sails’, made of 25 micrometre-thick aluminium coated Kapton, a high heat resistant polyimide film. When deployed, the sail increases drag, causing a controlled descent into the Earth’s atmosphere where the satellite will burn up.

Sean Murphy, a Principal Scientist in Dstl’s Space Programme, said: “It’s vitally important that we remove satellites that have reached end of life so they don’t remain in orbit as pieces of space junk. Space junk clutters up the space environment and ultimately pose a hazard to the useful satellites we rely on.”

Announcing the experiment at the first meeting of the Defence External Innovation Advisory Panel, the Minister for Defence Procurement, Harriett Baldwin, said: “Our £800m Innovation Initiative will help our armed forces maintain their edge into the future, where ever-evolving technologies present new challenges and opportunities. That’s why we have committed to spending 1.2% of our £36bn growing defence budget on science and technology. 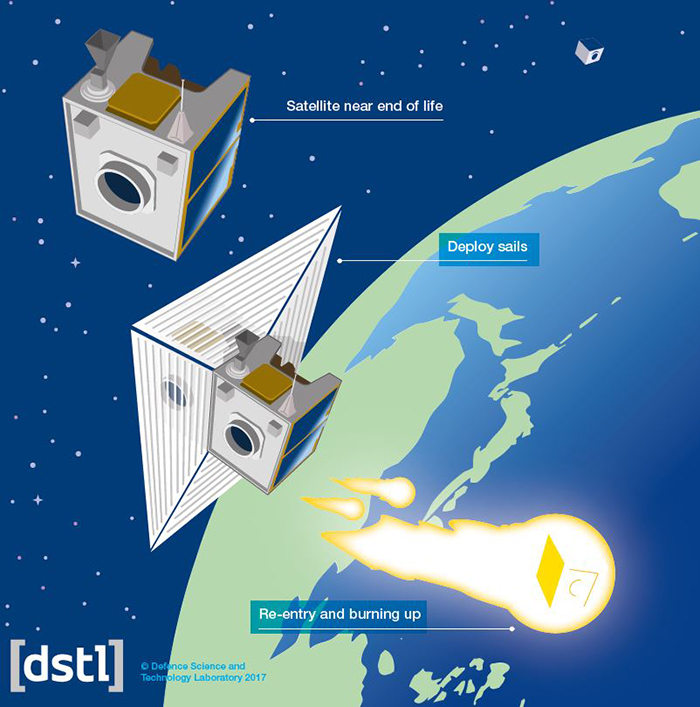 “The Innovation Panel will help meet the complex challenges of the 21st century, while delivering the high wage, high skills jobs of the future - and it’s particularly fitting that we welcome astronaut Major Tim Peake as I announce the UK’s leading role in cutting edge satellite research.”

The first Daedalus trial has just started. A Canadian satellite, known as CanX-7, deployed its de-orbiting sail in early May and is expected to burn up in the Earth’s atmosphere in around two years’ time. Two other satellites, TechDemoSat-1 (TDS1) and Carbonite-1 (CBNT1), have been fitted with Icarus de-orbit sails created by Cranfield University and are expected to start their descents later this year.

The experiment results will help to characterise changes in the brightness of the satellite caused by the sail deployment, quantify the drag increase that is due to the de-orbit sail, and critically compare different orbital dynamics models. Dstl is helping the co-ordination of the UK element, tasking sensors to collect data to support this experiment. Of particular relevance to the military community is the effect that such high-drag satellites have on current space situational awareness sensors and processing.