Innovation is a critical driver of economic growth. It is crucial that companies and states invest in new technologies to gain a competitive advantage. To highlight the importance of interdisciplinary and creative thinking, cleantech news portal Clean Technica, has published research analysing inventions that have been adapted for commercial use following their origin in space travel.

Space has fascinated humans for centuries, and our obsession with space has been a drive for innovation. It not only broadens the capabilities of technology but delivers remarkable breakthroughs. Some of the materials and products that originate in space travel do not break out of this realm, others, however, like solar panels, make their way into everyday use, often fundamentally affecting how we live on earth.

To pay homage to the power of space innovations, we have ranked some of the most important and unusual inventions linked to space. They have been assessed on how long they took to make the transition from the field of space to the domain of every day, and how long they remained in the marketplace. The time it takes for an invention to be implemented into everyday life serves as an indicator of how complex the technology is and the hurdles of adapting it to consumer needs.
The following table presents 12 innovations originally invented for scientific use, that have now been adopted into everyday life: 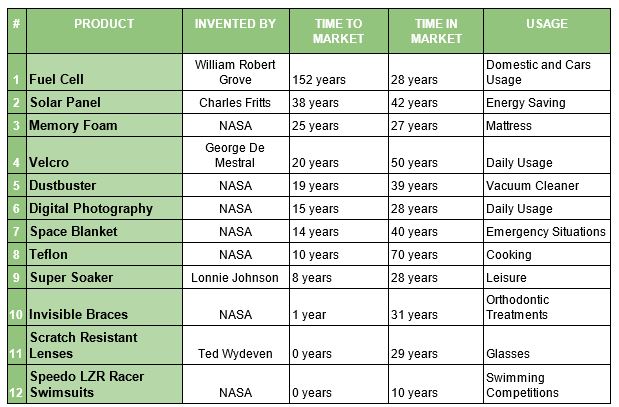 1. Fuel Cell
Time to market: 152 years (1838-1990). Time in the market: 28 years (1990-2018)
Developed by W. Grove in 1838, fuel cells were introduced to the space program in the 1960s to provide electricity and water to astronauts from the hydrogen and oxygen available in their aircraft. In the 1990s, the fuel cell made its way into cars and domestic use. One of the most recent applications is the Vitovalor created by Viessmann - a heating mechanism that processes regular gas to generate heat and electricity. It releases half the CO2 emissions of an average heating system.

2. Solar Panel
Time to market: 38 years (1939-1976). Time in the market: 42 years (1976-2018)
The first solar cell design was created by Russell Ohl in 1939 and pushed forward as a new technology by NASA in 1958 before entering the market in 1976. Today’s most advanced solar panels are made of carbon nanotubes that can capture natural light while reducing reflected light. This tremendously increases the efficiency of the panels.

3. Memory Foam
Time to market: 25 years (1966-1991). Time in the market: 27 years (1991-2018)
Invented by NASA in 1966 for its aircraft seats, memory foam is a unique material that is incredibly shock absorbent yet still pliable and comfortable. Originally used in aircrafts, since 1991 it has been employed in a range of products - mattresses being the most notable example.

4. Velcro
Time to market: 20 years (1948-1968). Time in the market: 50 years (1968-2018)
An accidental discovery by Swiss Engineer G. de Mestral in 1948 led to one of the most versatile and popular textiles of today - velcro. However, the popularity of velcro is largely thanks to NASA’s adoption of the material in the 1960s to secure different devices in space. In 1968, shoe companies like Puma and Reebok began to use it in footwear.

5. Dustbuster
Time to market: 19 years (1962-1981). Time in market 37 years (1981-2018)
Invented in 1960, when NASA commissioned manufacturing company, Black and Decker, to develop a drill that could provide its own power source during a moon exploration, this practical device found its way into the everyday household in 1981.

6. Digital Photography
Time to market: 15 years (1975-1990). Time in the market: 28 years (1990-2018)
It was NASA who developed the concept of digital photography, but the first digital camera was produced by Kodak in 1975. It was NASA’s further research in the 1990s that pushed digital photography to a whole new level. Now, it’s hard to imagine a modern day world without it.

7. Space Blanket
Time to market: 14 years (1964-1978). Time in the market: 40 years (1978-2018)
The space blanket was created in 1964 by NASA for its US space programme. The material was primarily used on the exterior of the spacecraft for thermal control. It is a thin sheet of plastic coated with a metallic reflective agent that reflects up to 97% of radiated heat. Since 1978 it has been used around the world by mountaineers, fire brigades and lifeguards in emergency situations, making it one of the most significant by-products of space innovation.

9. Super Soaker
Time to market: 8 years (1981-1990). Time in the market: 28 years (1990-2018)
As unlikely as it seems, the famous Super Soaker water gun is actually the by-product of a NASA engineer experimenting with a new type of refrigeration system. Credits go to Dr Lonnie Johnson, who machined a nozzle that shot powerful streams of water when hooked up to his bathroom sink. By 1991 they were sold widely on the market, and today, total sales of Super Soakers are approaching $1bn.

10. Invisible Braces
Time to market: 1 year (1986-1987). Time in the market: 31 years (1987-2018)
Translucent Polycrystalline Alumina (TPA), a material both translucent and stronger than steel, was developed by NASA in 1986 and only took a year to be available on the market for orthodontic treatment.

11. Scratch Resistant Lenses
Time to market: 0 years (1983-1983). Time in the market: 29 years (1983-2018)
In 1983, NASA’s Dr Ted Wydeven inadvertently developed the technology that would lead to scratch-resistant lenses after working on the spacecraft's water purification system. Scratch-resistant lenses last ten times longer than their glass or plastic equivalents. In 1983, Foster Corporation licensed the coating technology and now nearly all lenses are produced using this material.

12. Speedo LZR Racer Swimsuits
Time to market: 0 years (2008-2008). Time in the market: 10 years (2008-2018)
NASA’s fluid flow analysis software and wind tunnel testing facilities were used to develop a technologically advanced swimsuit that markedly reduces drag for swimmers. The suits first appeared on the market in 2008 and their impact was instantly demonstrated during the Beijing Olympics, with 23 of the 25 swimming world records broken by people wearing the LZR Racer swimsuit.

Read more
Power
GaN Systems captures a place in the 2020 Global Cleantech 100
Analysis
What does 2020 have in store for technology?
Events News
Taking connectivity to the next level at IoTSWC
Analysis
What inventions do Brits think the future holds?
Renewables
Game-changing clean technologies to watch in 2019
Aerospace & Defence
Enhancing radioresistance for space exploration and colonisation
Cyber Security
Drones reach for the stars! But watch this space...
Analysis
Cleantech Innovate 2017 – the finalists announced
Blog
From inventions to products - an alternative monetisation methods
Medical
Fighting cancer with space research
Analysis
Second Cleantech award for fast tracking Nujira