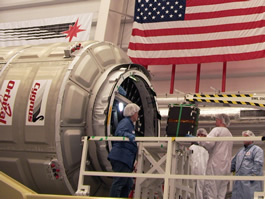 Miniature data logging devices from MSR Electronics are accompanying the flights of the unmanned spacecraft ‘Cygnus’ to the International Space Station ISS to take transport measurements for the fourth consecutive flight. The data loggers are being used in order to record shock and vibrations on the transport route of the supply transporter Cygnus to the ISS.

“We are getting truly spectacular data from these tiny data loggers”, says Michael Bain, ISS Cargo Integration and Operations Services Manager of the Orbital Sciences Corporation. NASA, the National Aeronautics and Space Administration of the United States of America, contracts with Orbital Sciences Corporation for commercial cargo delivery to the International Space Station.

The data loggers are being used in order to record shock and vibrations on the transport route of the supply transporter Cygnus to the ISS. According to Bain, cargo to the ISS includes consumables (food, clothing, science support, medical supplies, space operations support, periodic maintenance items, etc.), as well as spare parts, crew support, and science facilities.

Some of the cargo is sensitive to the loads imparted during transportation, especially during launch where structural loads and vibrations can be significant. The highly sensitive 3-axis-acceleration sensors of the data loggers measure these strains, so called G forces, during the entire space flight until the transporter docks with the ISS, and record them in their internal memory.

Michael Bain states: “We are able to track virtually every physical event that occurs on the spacecraft from roll-out to the launch pad, to rocket rotation to the vertical, to ignition, launch, main engine cut-off, stage separation, upper stage ignition and burn-out, fairing separation, ... even the movement of the spacecraft while attached to the space station arm.”

On orbit, the MSR data loggers are retrieved from the module by the ISS crew as cargo is unloaded. The data files of the loggers are down-loaded to a Personal Computer onboard and then transmitted to the ground. According to Bain, Orbital takes the data, compares it against models and mission specific predictions and then submits an analysis of the loads seen by the cargo during the cargo delivery mission to NASA as proof that the systems operated as advertised.

“Another prerequisite for the space flight was that the loggers had a very low weight, small format and very high memory capacity – conditions which the MSR165 fulfils, ”said Egli. Batteries used in the data loggers are individually tested and numbered at NASA's battery test facility at Johnson Space Centre in Houston, Texas. Tested batteries are shipped to MSR Electronics in Seuzach near Zurich and installed during initial production. Each unit delivered from MSR Electronics to Orbital is serialised and certified to contain a NASA-tested battery. Each data logger is then checked out and activated at Orbital Sciences in Dulles, Virginia, and later transported by plane or by car to the launch site, Wallops Flight Facility on Wallops Island, along the cost of Virginia. Once activated and prepared, they are installed in predetermined locations at the cargo compartment.