Can VR provide the jump-start for the haptics industry? 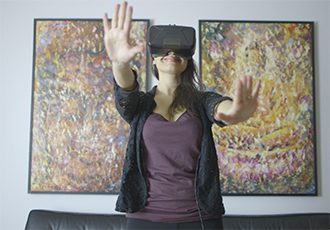 Haptic technology is now present in billions of electronic devices, from vibrating smartphones to notifications in industrial scanners. With this in mind, a new report from IDTechEx Research, Haptics 2017-2027: Technologies, Markets and Players, has revealed that the haptics industry will be worth $2.8bn by 2027.

In the recent past, the haptics industry had been short of prominent success stories. After the huge success that saw haptic actuators adopted ubiquitously in products like smartphones, the industry then suffered increasing commoditisation, high levels of competition and shrinking margins. The eccentric rotating mass (ERM) motor dominated for many years, and it is only recently that linear resonant actuators (LRAs) have taken significant amounts of market share, enabling some fresh growth. Even this change has not significantly shifted the haptics hardware landscape, as similar players tend to control market share around both types of actuator.

The entry barriers for players with new haptics technologies were critically high - the cheap, reliable and effective incumbents in the smartphone market have been infallible. Whilst companies large and small were able to differentiate using new technologies to provide new sensations, form factors or ideas, few came close to upsetting the status quo.

As such, these players increasingly looked away from replacing the incumbents in existing market, and instead towards the generation of brand new markets for their new haptic actuators. In the automotive space, many players have advanced significantly along the long journey towards commercial validation and adoption, but progress has been slow.

The boom in interest around wearable technology brought new players and new interest. For example, smartwatches could have new haptics in the body of the device or even in the watch strap, apparel products should need actuators that are flexible with the textile rather than bulky motors, and so on. Again, this drove some more interest, but progress has been slower than many would’ve liked.

However, after years of false starts, the virtual reality space is now offering the best opportunity for new haptics that we have seen over a decade. Whilst VR itself is nothing new, widespread commercially available platforms have only hit the market in the last 12-18 months. This has been fuelled by billions of dollars of investment, with thousands of players involved including all the largest technology players in the world. Not only this, but all of the largest players in VR (Oculus, HTC and Sony today) have explicitly defined the existing haptics as a key opportunity for technology development in the future.

The ripples of this have been felt throughout the haptics industry. Fresh excitement, investment and announcements have begun to appear, and several companies that were looking increasingly down-and-out are resurfacing. The challenges are still significant - maturity (read reliability, scalability and price-point) of many emerging haptics is still far from adequate for adoption, and worst of all, it’s the same incumbent haptics (ERM motors and LRAs) that they’ll have to replace. However, this time the requirements are different and the battle for adoption in the long term as this market grows is far from won.

Haptics 2017-2027: Technologies, Markets and Players includes detailed coverage of all of the haptics technology that are commercial today, or that will be commercial in the next decade. The report also contains an extensive section covering haptics in VR, detailing all of the major players, trends and developments in this space. The report finds that the market for haptics in VR could generate an additional $500m per year by 2022, as the first significant sector to reach these kind of hardware revenues since the smartphone a decade ago.