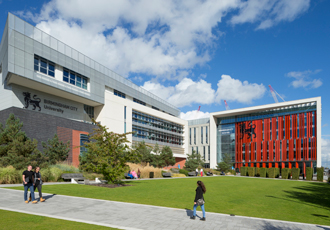 Representatives from two of India’s creative companies visited Birmingham City University to learn more about how the UK university is training the next generation of Virtual Reality (VR) professionals, and with the hope of exploring potential partnerships in the future.

The Head and Creative Director of JIO Studios (Aditya Bhat and Ankit Sharma respectively), along with the Founder and Managing Director of philmCGI (Anand Bhanushali) spent time on 8th November with senior academics as part of a visit organised by the UK’s Department of International Trade.

Based in Navi Mumbai, mobile network operator JIO is the world’s biggest data start-up company, attracting 138 million paid subscribers within less than a year of operations, and currently welcoming seven new customers each second. Part of Reliance, JIO’s parent company is the biggest private sector firm in India with a revenue of $51bn in 2017.

JIO’s in house studio is planning to launch its own VR app in 2018 and is hoping to collaborate with experts at Birmingham City University by expanding their technical know-how, co-creating content and ensuring they are making best use of the latest technology.

JIO also hopes it can work with students who are creating VR and Augmented Reality (AR) content by showcasing their projects on its new platform.

Meanwhile, philmCGI is an animation studio based out of both Mumbai and Pune, where some 90 artists provide computer-generated images and visual effects services in films and television for some of the biggest studios in Europe and Asia, and is also expanding its offer in VR and AR - two areas which are taught through Birmingham City’s University’s Digital Media Technology (DMT) Lab.

Based in the institution’s Faculty of Computing Engineering and the Built Environment, the DMT Lab is a research space focussed on finding new uses of digital technology. Among the projects taking place in the Lab, researchers are looking into the application of augmented and mixed reality systems, and digital audio processing.

The visitors from India were able to see some of the University’s leading research in this area, including a new mixed reality system which allows medical practitioners to view and interact with virtual replicas of patients’ organs, bones or body parts.

The business leaders also spent time in the University’s £62m Parkside Building, home to the institution’s wealth of media and recording facilities, including four TV studios.

Anand Bhanushali, Founder and Managing Director of philmCGI, said: “Birmingham City University has state-of-the-art media facilities; it is no wonder so many Indian students want to come to the UK to study! Today we have discussed a number of opportunities for collaboration, such as STEAM-based problem solving. Lots of innovative solutions can be developed when applying fresh minds to companies such as ourselves.

Professor Julian Beer, Deputy Vice-Chancellor, said: “Birmingham City University and indeed the wider West Midlands is at the forefront of digital media technology and our active researchers ensure our students are best equipped for future careers in image and audio processing, digital media distribution and mixed reality systems. At the same time, we are enabling our industry partners, who benefit from the new knowledge we are generating in this rapidly growing field.

“We are delighted at this opportunity to share knowledge and experience with our friends from India and we hope that from this visit we are able to build further institutional links with the country.”

The event was hosted by the University’s recently-established India Innovation Group, which comprises academics and staff who have a direct connection to or an interest to India in terms of collaboration, industrial and educational links, or who have joint projects currently in development.

The group meets on a quarterly basis to share ideas and update one another on the institution’s progress with its strategic links within India.

Chaired by Professor Rajinder Dudrah, Professor of Cultural Studies and Creative Industries, and one of the leading scholars of Indian cinema studies in the UK, the group is currently made up of a team of 13 academics and staff.

Professor Rajinder Dudrah, Birmingham City University, said: “India is an important part of the world for us, not just in terms of the special links we have with the subcontinent because of our international students, but also because there is a wealth of opportunity for mutual understanding, co-creation of services, the undertaking of research, and to jointly address some of the current and future socio-economic challenges that will come our way.

“We were pleased to host this special visit under the auspices of the India Innovation Group which has intellectual and personal relationships with the country and wider region, and we look forward to getting to know each other further.”

Another area of interest to the delegates was how Birmingham City University is managing the value chain from innovation to commercialisation, especially with its newly launched STEAMHouse project.

The UK Government announced last year that it will be contributing £14m to help the University create a collaborative innovation centre for solving the challenges facing micro, Small and Medium-Sized Enterprises (SMEs) in the UK’s West Midlands region.

By connecting Arts into STEM subject areas (Science, Technology, Engineering and Maths), as well as linking academic research and the vibrant creative arts scene surrounding the University, STEAMhouse hopes to develop a new supply chain across the region.

Birmingham City University has a proud history of engagement with India and has provided education for more than 1,000 Indian students across the institution’s four Faculties. Its alumni occupy senior positions in a wide range of organisations across India including AT&T, Barclays, BBC, IBM, Mitsubishi and Tata Elxsi.

The city of Birmingham itself has a proud reputation as one of the most diverse cities in Europe, and is home to nearly 65,000 residents of Indian ethnic origin.