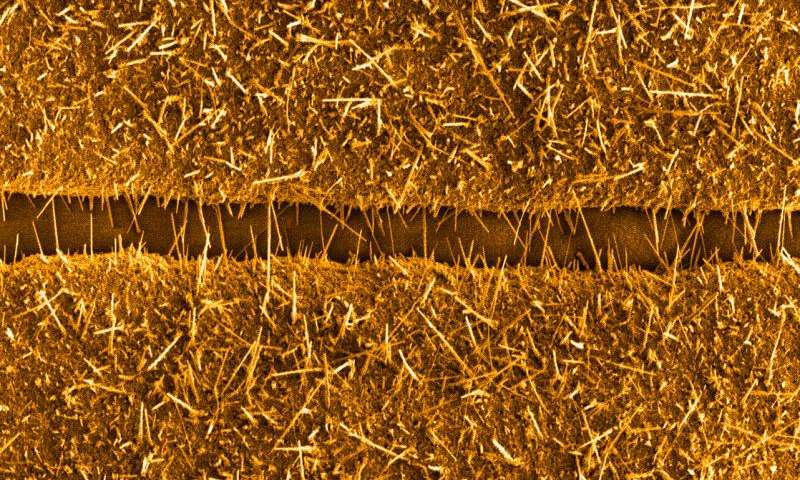 The detection of CO in the air is a vital issue, as CO is a poisonous gas and an environmental pollutant. CO typically derives from the incomplete combustion of carbon-based fuels, such as cooking gas and gasoline; it has no odour, taste, or colour and hence it is difficult to detect. Scientists have been investigating sensors that can determine CO concentration, and a team from the OIST, in tandem with the University of Toulouse, has found an innovative method to build such sensors.

As a tool for CO detection, scientists use extremely small wires: copper oxide nanowires. Copper oxide nanowires chemically react with CO, creating an electrical signal that can be used to quantify CO concentration. These nanowires are so thin that it is possible to fit more than 1.000 of them in the average thickness of a human hair.

Two issues have hampered the use of nanowires. "The first problem is the integration of nanowires into devices that are big enough to be handled and that can also be easily mass produced," said Prof Mukhles Sowwan, director of the Nanoparticles by Design Unit at OIST. "The second issue is the ability to control the number and position of nanowires in such devices."

Both these difficulties might have been solved by Dr Stephan Steinhauer, postdoctoral scholar at OIST, together with Prof Sowwan, and researchers from the University of Toulouse. They recently published their research in the journal ACS Sensors.

The final result is an exceptionally sensitive device, capable of detecting very low concentrations of CO. "Potentially, miniaturised CO sensors that integrate copper oxide nanowires with micro-hotplates are the first step towards the next generation of gas sensors," Prof Sowwan commented. "In contrast to other techniques, our approach is cost effective and suitable for mass production."

This method could also help scientists in better understanding the sensor lifetime. The performance of a sensor decreases overtime, and this is a major issue in gas sensing.

Data obtained with this method could help scientists in understanding the mechanisms behind such phenomenon, providing them with information that starts at the very beginning of the sensor lifetime.

More from Okinawa Institute of Technology