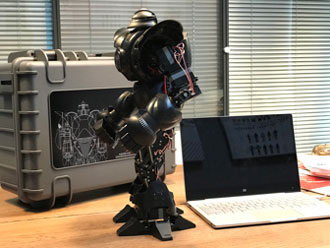 Pilot Labs has announced the Moorebot Zeus Battle Robot that takes robot fighting to an entirely new level. From Boxing, to Kung Fu, to Karate, unleashing the imagination is in the palm of your hand.

“The 25kg per servo motor punch makes this the most competitive fighter robot in the world,” said Jun Ye, CEO of Pilot Labs. “If my hand takes Zeus’ punch it really hurts. Zeus might even be too strong for most of the robot competition right now!”

Approximately 14" high and weighing in at 2.2kg, the new Moorebot Zeus robot is a fighter specifically designed for battle competition. The standard configuration is comprised of 22 Servo motors with up to 25kg punch force each, with up to 32 motors for the next advanced version. All Servo motors are metal-geared for durability during battle and to sustain heavy forces. The punch speed can reach up to 150m/sec.

The heavy duty custom developed battery supports up to 50 minutes of continuous fighting. The product comes with many standard movements, with an additional graphical programming tool for users to customise more movements.

In addition, a library of mechanical design files are available for users who want to customise the robot armour with 3D printing with colours, shapes and designs. The robot is waterproof, and dustproof. Moorebot Zeus brings robot fighting to a new level.

The current version uses a manual wireless controller but future versions will be more autonomous using built in intelligence, computer vision and even Alexa or other voice control. “Zeus - attack! Punch left!”

Designed for serious gamers and robot fighting enthusiasts, the retail price for the 14kg punch force version will be about $1,600.

You can experience the new Moorebot Zeus at CES 2018 - Booth 64716 in the new South Plaza (Design & Source Marketplace) located behind the Renaissance Las Vegas Hotel and south of the LVCC South Hall.