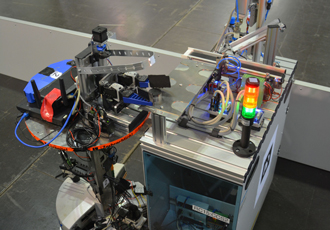 They can play football, they have mastered rescue missions and can even take over the logistics in a Smart Factory – they are the robots from across 14 different countries that have competed against each other at the RoboCup German Open 2018 in Magdeburg. In the logistics league, the Carologistics team from Aachen has become German champion - with the support of the motion plastics specialist igus.

How far has robotics and artificial intelligence developed in the last few years? It is exciting to watch systems from all over the world in real-life at the RoboCup German Open 2018. Pupils and young engineers from around 40 universities and research institutes had a wide variety of robots in their backpacks: from small humanoid robots to table-high transport robots. They competed in various disciplines, such as football, simulated rescue missions or intralogistics tasks.

A large number of the teams use self-lubricating and maintenance-free high-performance plastics from igus in the moving parts of their robots. Team Carologistics, sponsored by igus, is one of them, achieving first place in the logistics league. Operating in a Smart Factory environment, the robots communicated with each other and oriented themselves in a 112m2 field without help. They transported rings and caps between assembly stations and assembled products at the end.

In the new intralogistics robots, drylin linear modules are now used in the three-axis control of the gripper. In addition, an electric linear axis with a spindle motor and a dryspin leadscrew, which ensures precision when placing and removing the products. In the Standard League, in which robots compete on the football field, igus also supported Team B-Human of the University of Bremen and the German Research Centre for Artificial Intelligence. Last year's winner took 3rd place and, like Carologistics, will compete against teams from all over the world at the World Championship in Montréal, Canada, in June.