Everything you need to know about flying a drone - Part 1 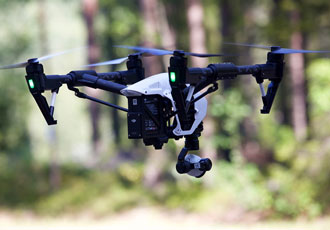 Whether it’s amateur racing or professional photography, drones can now do plenty of stuff. They can even move things from place to place. If you’ve got one and you don’t know how to fly it yet, don’t despair - flying a drone isn’t rocket science. However, it’s not exactly a walk in the park, either. The thing is, with a little bit of determination and practice, you’ll soon get the hang of flying your drone.

You can find part 2 of this article here.

What exactly is a drone?
Drones are basically unmanned aerial vehicles, or UAVs.

Military drones are really similar to typical airplanes. They’re a tad smaller than typical fighter jets, and they can be extremely precise. They have the obvious advantage of not endangering the pilot’s life in extremely risky operations.

Now, you probably don’t have a military drone at home - and the one you do have probably doesn’t look much like a fighter jet.

Don’t expect quadcopters to be extremely stable, though - in windy conditions they’re know to wobble and shake a bit. Professional photographers use drones with six or even eight engines.

Your quadcopter will be stable enough if used in decent weather, so stability shouldn’t be an issue for the average user.

The incorporated computer considers changes in any of these directions and accelerations and increases or decreases rotor speed accordingly, to stabilise the quadcopter.

So basically what we mean by drones are quadcopters of some sort - and the thing is, regardless of brand of functions, the main flying mechanism is the same.

Of course, you have to know the basic terminology in order to understand everything - but that’s pretty straightforward, too.

Key terminology
The first two things you should know are the two pilot visibility modes: line of sight versus first person view.

Line of sight flying refers to that situation where you can see your drone while flying it. This implies relatively little distance between you and the drone, and, of course, not too many obstacles getting in your way.

The second visibility mode is FPS, or first person view. In this mode, you’ll see through the incorporated drone camera, rather than by direct contact. This is mostly applicable to larger-distance flights.

A quadcopter has different parts, each known by a specific name.

The main engines that keep the drone going are known as propellers or rotors. Depending on how fast they spin, the drone changes its elevation and direction.

The speed of each propeller is controlled by the internal computer, so that the drone can be as stable and responsive as possible.

Most drones also have a camera – and if they don’t, they’ll at least have a camera holder. Aerial photography and videography are pretty popular among drone enthusiasts.

Finally, all drones come with a remote control or a transmitter – the device that helps you control the quadcopter.

Now that you know the main parts of the drone, it’s time to talk about the different control and movement terminology out there.

If you want to increase or decrease the height of your drone, you’ll use something called throttle. To do this, you’ll simply have to push the left stick (or the elevator) – the drone will gain elevation if you push the stick forwards, and lose it if you push it backwards.

To roll the drone, you’ll have to push the right stick (also known as the aileron). A left push will roll the drone to the left, and a right push, to the right.

Yawing refers to steering the drone much like you would a car. Unlike the roll, yawing does not alter the drone’s location if the drone is stationary. To yaw left, you’ll have to push the left stick left. To yaw right, push it right.

The pitch of the drone refers to its moving forward or backward. This is basically done by altering its inclination. To move the drone forwards, you’ll have to push the right stick forward. Do the opposite to get the drone moving backward.

Most remote controls also have trim buttons, allowing you to manually adjust the yaw, roll, pitch and throttle, if they’re not balanced.

Some of the most common drone maneuvers also go by different names. A bank turn, for instance, refers to a clockwise or counter-clockwise turn – either left or right. A flying 8 figure is pretty self-explaining, and hovering refers to a stationary, mid-air drone.

Finally, there are three flight modes, depending on how responsive the sticks are, after you’ve altered your drone’s initial position.

The first flight mode is the manual. If you’re using this, any change in position will not be reverted if you simply let go of the stick. For instance, a drone will still roll left after you’ve let go of the right stick.

The second mode is the stabilise. This basically re-adjusts the roll and pitch input, so that your drone won’t keep on rolling or going forward, after you’ve let go of the sticks.

You’ve then got the altitude hold mode. This is similar to stabilise, only that your drone will be programmed to hold altitude after you’ve let go of the sticks.

Loiter mode functions much like stabilise, too, only that the drone will come to a standstill once the sticks are released.

Some drones also have lots of other flight modes, such as sport, drift, throw, or follow me, which can be used by the more experienced pilot for different purposes.

For instance, the follow me mode uses your GPS location to have your drone follow you – which means you can record great videos simply by biking through the park.

What is a drone made of?
Now that you know some of the basic terminology, it wouldn’t hurt knowing what a drone is made of. After all, drones might break – and when they do, you need to know what’s wrong.

The main component of a quadcopter drone is the frame. This is basically what supports all other parts.

The four propellers are what keep the drone going. A quadcopter has four but, as we’ve already mentioned, other drones have six or eight propellers. Each propeller spins in the same direction as the one directly across it.

Each of the four propellers is powered by an individual motor.

Depending on the direction you want your drone to go, each motor is powered to different extents – the components that dictate the rotation speed of each engine are called Electronic Speed Controls, and they make the connection between motors and the battery.

The battery is the power source of your drone. Depending on the model, the battery can power your drone from several minutes to about an hour. You’ll also need a charger to charge your batteries.

A non-responsive drone usually means a defection in one of these two components – or it might simply be that your transmitter battery is discharged.

Finally, the Flight Control Board is the built-in computer that controls the gyroscopes and accelerometer, essentially giving the direction of your drone.

They are in direct connection to the electronic speed controls.

All you need to do now is make sure everything’s in place – skipping this step means risking your drone’s safety, and spending extra cash on getting things repaired.

The first thing you need to do is make sure your batteries are charged and secured. Without that, you won’t get anywhere with your beautiful drone.

Check each propeller for any wobbling. If they’re not fitting securely, you might want to tighten them up – they’re really important for the stability and general flight behavior of your drone, so neglecting that will likely ruin your flight.

If the propellers are in place, you’ll then have to check your drone for any missing or loose screws. Secure everything, as the vibrations during the flight might cause the loose screws to fall out.

Finally, remember a few basic safety precautions: never touch a moving propeller, turn the throttle down if you see your drone moving out of control, and remove the battery before doing any work on the drone – you don’t want it turning on by accident.

Where can I fly?
There’s no one single type of area that you should fly in – drone enthusiasts have been known to enjoy even indoor flights quite often, and forest racing isn’t unheard of.

However, if you’re just learning to fly a drone, you should absolutely not fly indoors – the risks you’re taking are simply too big. You could damage your room, your drone, even yourself.

The best area you could be flying your drone if you’re just learning to fly is a large, open space, with great all-around visibility. Things like sparsely-forested parks or football fields are great – or, if you’re in the countryside, just take to the hills.

Another thing you want to take into consideration is how crowded the area is. Though drone specialists handle flying their drone around people easily, you don’t want to take the risk of hurting anyone. Avoid busy places – if you’re in the city, the best way to do so is to get up early in the morning.

Weather is another important factor when it comes to flying your drone. Though most quadcopters have pretty powerful flight stabilisers, strong winds will negatively impact your flight experience.

Again, practicing in the morning will increase your chances to enjoy a pleasant weather. You really need to check the weather forecast before scheduling your training sessions.