Ever had your portrait drawn by a robot?

Home > Robotics > Ever had your portrait drawn by a robot?
14th March 2019
Source: TM Robotics
Posted By : Lanna Cooper 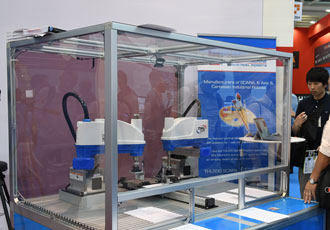 TM Robotics is bringing its robot sketching demonstration to Automate 2019, held at McCormick Place, Chicago, from 8th-11th April 2019. TM Robotics will exhibit a range of Toshiba Machine’s robots, including the THL500 SCARA, which will be creating free artist impressions of visitors at booth number 6763.

Part of TM Robotics’ extensive SCARA robot range, the THL500 model will demonstrate its accuracy and speed during the portrait drawing demonstration. Using a connected camera, the robot will capture facial features and sketch the image onto a piece of paper, while being automatically unloaded and loaded using a Toshiba Machine BE series actuator.

The THL series consists of eight SCARA models, ranging from 300x1200mm arm length. However, it is the THL500, one of the mid-range THL models, which will be playing the role of the artist at this year’s Automate.

Alongside the portrait drawing demonstration, TM Robotics will launch the THE600 SCARA robot to the North American market. The THE600 builds on the specifications of the existing THE400, boasting twice the speed and 60% higher payload capacity than competing SCARA models in the same price range.

“As one of the first industrial robot manufacturers to bring SCARA models to the market, Toshiba Machine has a wealth of experience in developing this technology,” explained Nigel Smith, President of TM Robotics. “We’re demonstrating several models from our SCARA range at Automate, including the well established THL model, which will be creating free sketches of visitors to the stand in real time.

“The stand will also exhibit the well-established TH-A range and the high speed, high performance THP models. Plus, if SCARA robots aren’t your thing, the latest six-axis robot range, the TVM series, will be on show.”

TM Robotics will demonstrate its technology from booth 6763 at Automate 2019.