Colleague robots could take over the world of work

Home > Robotics > Colleague robots could take over the world of work
15th May 2018
Source: automatica
Posted By : Lanna Cooper 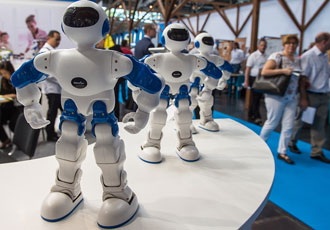 With around 1.8 million industrial robots, the number of robots has reached a new record in factories around the world. Workers around the world rate the fact that 'colleague robots' can take over work that is detrimental to health or handle hazardous materials positively (64% on average). However, employees are worried about how their own training can keep up with the pace of the working world 4.0.

These are the findings of the automatica Trend Index 2018 - 7,000 employees in the US, Asia and Europe in a representative survey of the population were interviewed by a market research institute on behalf of automatica.

When it comes to their own country, only about one in four employees is convinced that training and development already plays a key role in the workplace of the future. This new collaboration with robots is regarded by the majority of all seven countries (average 68%) as an opportunity to master higher-skilled work.

Particularly in China (86%) and in the US (74%), people expect that robotics automation will provide added impetus to further their vocational training.

The number of higher-skilled and better paid jobs will rise in the future with the new human-robot teams - according to about one in two survey respondents in Germany, France, Italy, the UK and Japan. In China and the United States, as many as 80% of workers presume this will be the case. 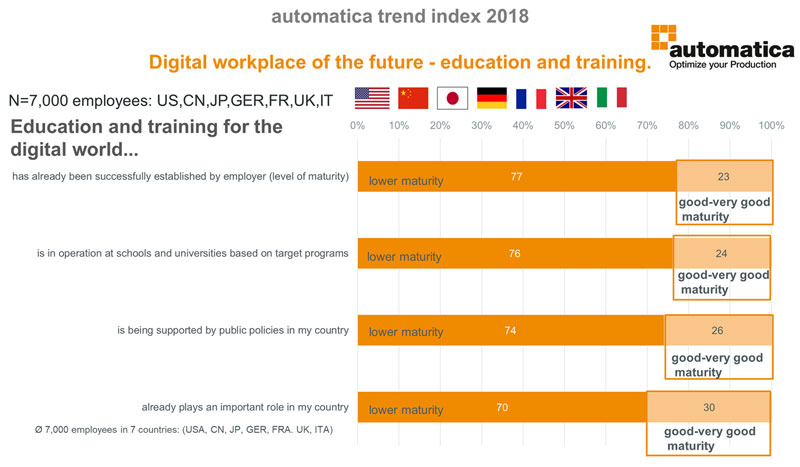 Robotics and automation are very popular
The companies can count on a positive basic attitude among their employees regarding robotics and automation. In the working world of the future, human-robot teams will improve manufacturing by combining human talents with the strengths of robotics - some 70% believe.

When people and machines work hand-in-hand without a safety fence, people need talents such as judgement and fine motor skills. The robot can score with power and precision.

Sixty four percent of all workers from the seven countries want to use Artificial Intelligence (AI) for human-machine collaboration. Seventy three percent assume that AI makes it easier for people to assign the machine new tasks - for example, via voice command or touchpad. 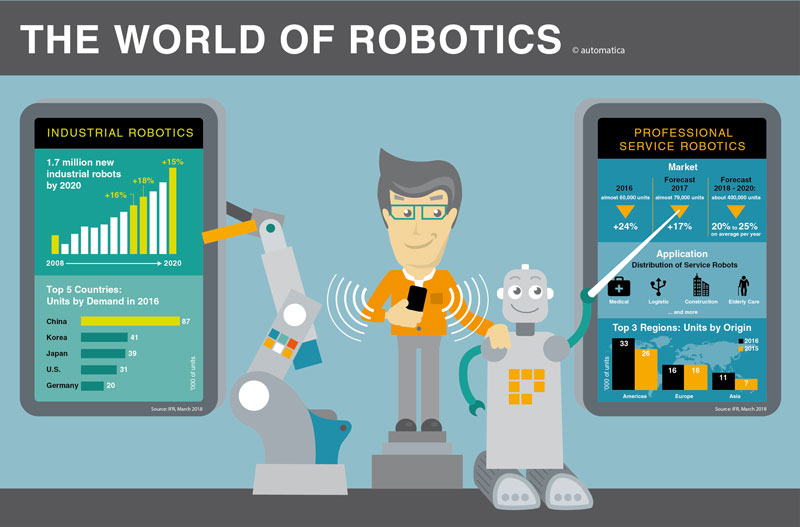 automatica 2018 shows rapid development to work 4.0
“As the survey shows, employees want more consistent com-mitments from politicians, industry and science as regards training and development for work 4.0. At the same time, the technological development of intelligent automation and robotics is advancing at a tremendous pace. All aspects of this development will be showcased at the automatica 2018 in Munich from 19 to 22 June.” said Falk Senger Managing Director of Technology Fairs at Messe München.

Trade visitors can see there how people and machines will interact in the future, how they will communicate with each other, and how ergonomic and versatile jobs will be. Place: hall B4, booth 338.