Our website is made possible by displaying online advertisements to our visitors. Please consider supporting us by disabling your ad blocker.
Home > Products > How sensor technology is the key for autonomous vehicles
Sensors

How sensor technology is the key for autonomous vehicles

Sensors are very much a part of modern vehicles and even more so as we move to the future of transportation. They play a crucial role in safety via a variety of technology that aids the driver. Sensors are also used in vehicle maintenance, identifying current and future issues that need addressing and relaying real-time information to an engineer. Richard Woodward, Product Manager for Sensor Technology at Distrelec discusses.

As we move into the future of transportation, autonomous vehicles are becoming ever more common. We have already seen numerous applications and benefits to using this technology, especially in the logistics and supply chain industry.

Autonomous vehicles offer great benefits and convenience to drivers and passengers. We have already seen this in the past with intelligent parking technology. Vehicles have sensors that can scan nearby surroundings and suggest if the parking space is suitable and autonomously drive the vehicle into the parking slot without any driver input. This is only available due to advances in vehicle sensor technology. 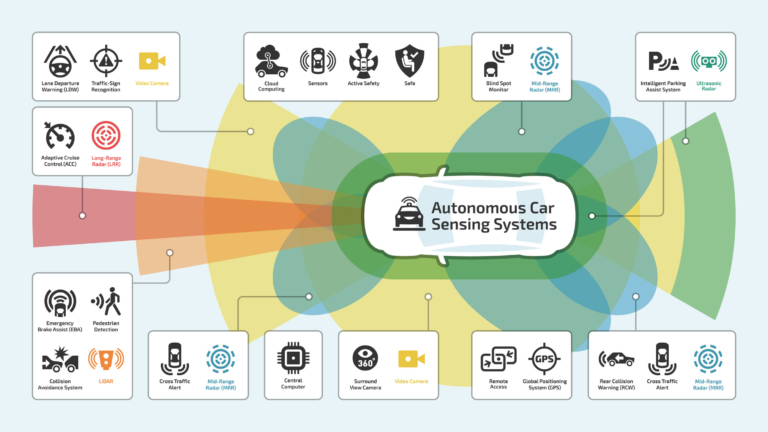 Artificial intelligence and its role

As mentioned earlier, most vehicles in the last five years rely on the driver being in control of the vehicle but assisted by advanced driver assist systems (ADAS). ADAS is categorised into five levels of autonomy:

The question now is: does artificial intelligence address the needs of the fully autonomous vehicle? AI and machine learning are already becoming a part of modern life, but they cannot solve problems independently. Autonomous vehicles rely very much on information surrounding their spatial awareness. The key for obtaining ADAS levels 3 to 5 will lie in the data received from vehicle detection sensors. Autonomous vehicles will require enhanced spatial awareness, particularly in harsh weather conditions and terrains. This enhanced awareness will require objects to be mapped closer together with an exact location for additional precision. This is where the importance of combining the suitable types of sensors makes the difference.

Car manufacturers have many challenges to deliver a fully autonomous vehicle. We know that autonomous vehicles ultimately rely on many sensors to give feedback to the control system. These sensors have to work in all types of conditions, and in some cases, extreme weather can play havoc with the readings.

The weather and other environmental factors such as heavy traffic, dirty road signs, and no road markings can negatively impact the accuracy of its sensing capability.

Most autonomous vehicles will use AI and machine learning to process data from the sensors. This will allow the vehicle to make the correct decision about its actions. Machine learning will use its algorithms to help identify objects and classify them, such as vehicles, pedestrians, streetlights, street signs and more. The vehicle can then take actions such as steering, braking or swerving to avoid an object.

In the future, vehicles will be able to do this object detection and classification much more efficiently and rapidly than we humans can. At the moment, no basis ensures machine learning algorithms are safe.

There is no uniform agreement between standardisation bodies of car manufacturers on how machine learning is trained, tested and validated.

The key for adoption will come through collaboration across the industry, which in some cases is very difficult. Most car manufacturers will design and build their autonomous vehicles the way they think it is best.

True collaboration through the vehicle standards agencies would accelerate the technology and provide much safer vehicles, assurance from the public and ultimately acceptance.