You can wave goodbye to your traditional postman's van as the Royal Mail, the postal service here in the UK, is going futuristic as it trials electric vans from car maker Arrival. Partnering up together, UK-based company Arrival and the Royal Mail plan to operate nine trucks to deliver mail and packages in London and the surrounding areas.

This may seem like an idea that is a long way in the future to some people, but actually the deliveries began trialling last week from the postal service’s central London hub, and are rumoured to enter service fully in December.

The electric trucks come in three different sizes of 3.5, 6 and 7.5 tonnes, are co-branded and have a range of 100 miles on a single charge. These electric vans aim to benefit people and the environment, as according to the company they will produce zero emissions.

Denis Sverdlov, a Russian businessman who runs Arrival stated: “Cities like London will benefit hugely from a switch to electric, in terms of both pollution and noise.”

The current prototypes are fitted with wing mirrors, however a spokesperson for Arrival said these are to be removed from the final design, as cameras will be used to monitor the traffic at the rear end.

In terms of visuals the van are very striking, with a huge front windscreen and windows for maximum visibility to aid the driver, slightly spherical and hulking and of course covered in Royal Mail’s signature red colour.

Royal Mail has reported that it is ‘delighted’ to be collaborating with Arrival. Royal Mail Fleet’s Managing Director, Paul Gatti commented: "We will be putting them through their paces over the next several months to see how they cope with the mail collection demands from our larger sites." 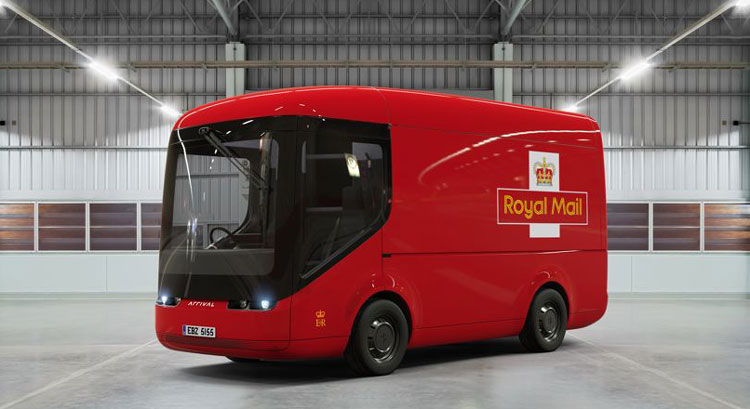 The Royal Mail’s fleet is currently comprised of 49,000 vehicles. Arrival has a new factory in Banbury, and the electric vans are some of the first vehicles produced there. The company claims it’ll be able to produce 50,000 vehicles yearly from the factory, using just AI and robots.

Arrival says the electric vans are the same price as diesel trucks, which makes the environmentally friendly vehicles more accessible.