How many times have you been out, and your phone has died? The number of people that want to charge their smartphone on the move is on the up. Whether it’s during the morning commute, in a hotel lobby or during a coffee shop pit stop – as smartphone uptake has risen, so has demand for battery life.

Recent research found that 30% of UK adults now charge their phone in a public place at least once a month, while 58% would like to see more public buildings feature USB charging outlets. This figure is only expected to rise.

However, installing USB charging outlets is not just a way to meet public demand, they can also make charging smartphones and tablets a significantly safer process.

The stakes are high
With the rise of smartphones has also come the rise of fake or unofficial smartphone chargers. When asked in our survey, over half (57%) of the respondents were unsure or admitted to buying a cheap phone charger that was made by a different manufacturer to their phone, while 46% had purchased one from e-commerce merchants on websites like eBay or Gumtree – increasing the likelihood of it being fake.

These figures follow those reported by the Chartered Trading Standards Institute (CTSI) last year, which found only three out of approximately 400 fake Apple chargers were insulated well enough to protect the user from electric shock – a risk that fixed USB charging outlets can mitigate. 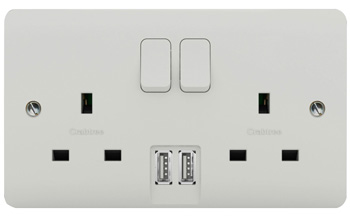 Other safety risks associated with the use of fake or counterfeit phone chargers including electric shock, screen burns, electrical fires and power cuts. However, out of those surveyed 47% did not think that electrical shock is a risk when using an unsolicited charger.

Despite this, more than 100 respondents confessed that they had experienced something dangerous when charging their phone, with many admitting to fires, smoke, sparks and burning.

One described how they plugged in their phone charger at work and it ‘started to spark and make a loud noise.’ When they went to check on it, the charger was black and they ‘could smell burning.’

What can the specifier do?
Clearly, there’s a need for a public education of the risks associated with fake chargers. Greater public awareness is key but there’s other ways other ways we can nip this problem in the bud.

That’s where the specifier comes in. Although its near impossible to stop or monitor the use of cheap portable chargers in commercial buildings, especially because they’re often bought unknowingly, specifiers have a professional duty optimise safety by taking full advantage of the new opportunities available to them.

By sourcing USB charging facilities in fixed installations, specifiers can guarantee an extra level of safety to the public using commercial buildings. Sockets with integrated USB charging outlets and intelligent mobile device charging, offer higher levels of user safety by automatically managing the charge to match the needs of the device plugged in.

This ability to manage and match the charge, will guarantee optimal charger performance regardless of mobile device brand or charger used. As well as limit risk of fire or electric shock, this means that expensive devices will not suffer component damage or screen burn. Another benefit is that the charging needs of the user can be met, without compromising the speed at which their device charges.

The future of charging
Charger sockets that are part of the fixed installation offer a safer way to meet people’s needs but they are not currently a requirement within the IET wiring regulations. It’s for this reason that fixed USB charging outlets require a separate mention in specifications - if you don’t ask for them, you won’t get them.

Safety in new builds is a huge concern, particularly in light of recent news events. While the public needs to take more care when purchasing chargers, it’s not any one person’s responsibility and specifiers also have a role to play. After all, every specifier strives to keep buildings as safe as possible for the public using them.

As people look to prolong their smartphone battery life, USB charging outlets will be key. Not only do they solve the problem of public demand, but also the associated charging risks – it’s a win-win.