LED technology designed by Kyocera Corporation is being utilised in a facade lighting system to showcase the Kyoto building of Wacoal Holdings. Completed last month, the system illuminates the building every night. Kyocera’s high-colour-rendering LED lighting, which combines violet LEDs with phosphors and proprietary optical technologies, creates delicate illumination in a wide range of colours.

The system designed for the Wacoal Building bathes its facade in an elegant gradation of hues suggestive of Kyoto.

The facade lighting system is the first in Japan to operate by modulating red, blue, green, and white light generated from violet LEDs. Furthermore, the building features an environmental design with a 36kW Kyocera solar power generating system installed on its rooftop. This system is estimated to generate enough electricity to power the facade lighting for approximately three to four hours a day.

About Kyocera’s high-colour-rendering LEDs
By combining violet LEDs, RGB (red, green and blue) phosphors and optical design technology, Kyocera’s high-colour-rendering LEDs produce light which is extremely close to natural sunlight. Since the light includes a wide range of colours within the visible range, it facilitates accurate colour rendition that is difficult to achieve with conventional LED lighting. 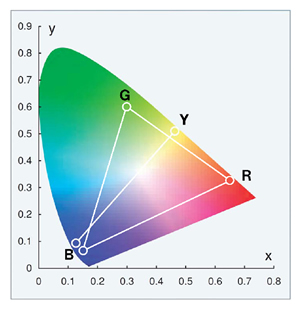 This feature has brought Kyocera’s high-colour-rendering LEDs into many diverse applications — including display lighting for fine-art museums, surgical lighting, colour-inspection lighting for industrial processes, and illumination for Japan’s revered ancient shrines and temples. Based on its expertise mainly cultivated in Japan, the company has started to provide LED modules in other markets that have a culture of valuing the quality of light for specific applications. Kyocera will present the LED modules from 8th to 11th November at electronica 2016 in Munich, Germany (hall A3, booth 241). In addition, the company will introduce them at Forum LED Europe 2016 in Lyon, France, a global event for LED lighting from 8th to 9th December.

While conventional LED lighting technology (based on blue LEDs that use yellow phosphors) produces colours only within the straight line between B and Y in the CIE Chromaticity Diagram, Kyocera’s violet LEDs with RGB phosphors can produce any colour within the R-G-B triangle.