The Industrial IoT (IIoT), a subset of the IoT evolution, is all the rage within automation companies as they seek to add a high margin software component to their traditional businesses.

Maxim Integrated chips are used to build these automation systems. As such Suhel Dhanani explains the company’s perspective on how automation system design has to evolve, or in some cases, change as companies attempt to put their automation systems online to take advantage of the IIoT. This article introduces IIoT and focuses on security challenges that must be solved to implement secure IIoT capable end systems.

The Industrial IoT in manufacturing

Manufacturing can get the most leverage from the IIoT because of the sheer amount of data it can capture and process. Data is underpinning of the IIoT since it can be analysed and visualised to help optimise operations and costs. Within manufacturing, security solutions provided by intelligent sensors, distributed control and complex, secure software are the glue for this new revolution.

To realise the promise of IIoT, we have to put a lot of our systems, even legacy systems, up in the cloud. This will have profound security implications since the security implementation for industrial control systems has not kept pace at best, and in some cases, is non-existent. This will change as actors (malicious or otherwise) realise that a factory or a plant is effectively online, and exploit different attack opportunities.

Security will have to be a combination of software as well as embedded hardware to protect critical control systems from a variety of attacks. The three key challenges are hardware authentication with secure keys, secure communications using TLS and secure boot. Since connectivity (the thing that enables IIoT) completely exposes all of our security shortcomings, security cannot be an afterthought if we are to realise the benefits of the IIoT.

The benefits of IIoT at work

A good example of the IIoT at work is General Electric’s newest $170m plant in upstate New York. It opened about a year ago to produce advanced sodium nickel batteries used to power mobile phone towers. The factory has more than 10,000 sensors spread across 180,000ft2 of manufacturing space, all connected to a high speed internal Ethernet. They monitor activities such as which batches of powder form the battery ceramics; how high a temperature is needed to bake them; how much energy is required to make each battery; and what local air pressure is being applied. On the plant floor, employees with tablets can pull up all the data from WiFi nodes set-up around the factory.

Another good manufacturing example is the Siemens Amberg Electronics Plant that manufactures the Simatic programmable logic controllers (PLCs). Production is largely automated - machines and computers handle 75% of the value chain on their own - the rest of the work is done by people. Only at the beginning of the manufacturing process is anything touched by human hands, when an employee places the initial component (a bare circuit board for example) on a production line. From that point on, everything runs automatically. What’s notable here is that Simatic units control the production of Simatic units. About 1,000 such controls are used during production, from the beginning of the manufacturing process to the point of dispatch. 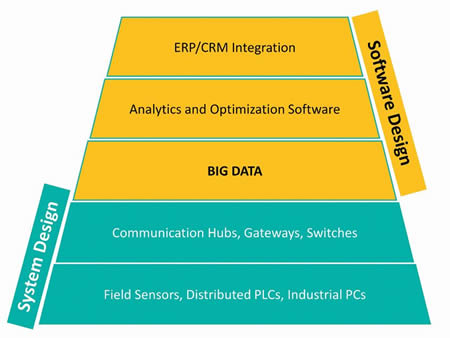 IIoT harnesses sensor data, machine-to-machine (M2M) communication and automation technologies. Smart machines are better than humans at accurately and consistently capturing and communicating data used to fix inefficiencies and solve problems in terms of up-time, scheduled maintenance, power efficiency and more efficient utilisation, sooner. Maxim Integrated has broken down the IIoT in terms of a stack as shown in Fig. 1 (above). At the very bottom of the IIoT stack, are the devices (systems) on the factory or process floor. These can be field sensors, controllers, industrial PCs, etc. All of these are hardware systems and can include aspects of hardware security. These end devices must have useful data to communicate and are generally hooked up to communication hubs, gateways and switches so that the data is put in the cloud (or an intranet) as big data.

However, that’s not all. The promise of IIoT is that this data can be integrated within the ERP and CRM software of the firm to not only efficiently plan and cost out a manufacturing process, but also to use the customer/market information to change assembly lines and process parameters.

The first level of analysis and interaction occurs at the edge - the data is collected from a sensor (e.g. a wind turbine sensor, a motor encoder or a vibration signature). This is processed locally to help understand how to tweak parameters that would give the highest efficiency or provide an early indicator of a potential failure.

The next level of analysis is done at the control room or plant level where sensor data from multiple end devices and even multiple assembly lines is aggregated to make decisions that would increase the efficiency of the factory or a process. For example, a control room making idling or sleep decisions of the various end devices to reduce the overall power profile of the process.

These first two aspects of using data to positively impact operations is what we are all familiar with and use in some way, shape or form. However, what IIoT envisions is not just an increase in the data collection and analysis at the first two stages, but integrating the process data with the enterprise data to make really interesting decisions that so far have not been made before.

Consider a company enjoying a market explosion. The assembly line can be programmed to manufacture higher volumes of the product, or completely bypass sub-assemblies adding features not valued by the market. Now, combine both the operating and financial data to provide more insight to the CFO. The agility of the company and its ability to pivot, change, and continue to grow can be exponential. Indeed, it is an attractive proposition, and many are eager to move forward, quickly. So quickly that security has not been keeping up with the new IIoT systems.

There are a few ways that IIoT systems are vulnerable to attacks. Among the two most prominent are cloud storage and network architecture.

Putting data on the cloud (public or private) is an integral component of the IIoT. However, this comes with huge security implications. Traditionally, industrial control system (ICS) vendors have maintained that their systems have a built-in air gap. This is no longer true when these systems have a direct or indirect connection to the Internet. IIoT is going to drive the understanding that ICSs need to have embedded authentication and security features.

Let’s look next at the network architecture that enables the IIoT. Fig. 3 (below) provides a top level view of how the field devices in a factory or a manufacturing process are ultimately connected to the network. 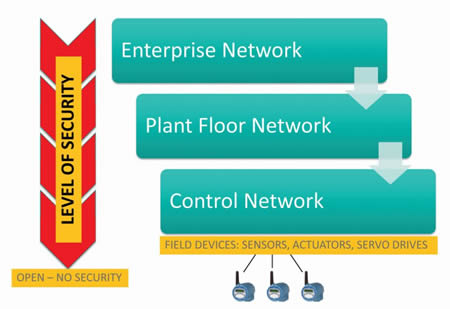 A plant network lets supervisors see the entire plant operation and deduce how the different sections of a plant interact with each other. Information at this level allows for the optimisation of the entire plant or an oil field operation. Ultimately, this plant network information is integrated with the enterprise/business network to enable the real promise of IIoT.

Each level of operation within the control network needs to have its security needs assessed - security is different at each level. If you start at the top, the domain of IT, what you have are secure switches and servers that are (hopefully) updated with the latest software and patches:

Addressing risks in industrial control systems at the field level

When we look at the field level in more depth, the two primary points that present risk to the ICS are remote field sensors and IO modules. At stake are up-time, predictable maintenance and overall industry efficiency - the cornerstones of IIoT.

The risks with PLC CPU and solutions

What controls your plant or process is the PLC and the main CPU that is running all the control algorithms. However, these systems were never designed to withstand security attacks and breaches. Hence, once these systems are connected online, there are many ways to compromise the main CPU of the PLC. Some of the attack surfaces can be applications software, OS or hardware, but the most vulnerable surface is the firmware. If the firmware can be modified or infected, any change due to malware is not only hard to detect, but also if it is found, it is very difficult to ascertain the intention or purpose behind it.

Most PLCs lack source and data authentication on firmware uploads. Some PLCs even lack checksums for validating the correct transfer of the firmware. If the attacker can modify the PLC firmware, they can:

Not everyone wants to take control of your system to destroy your plant. The risks can be more subtle. There is a lot of intellectual property embedded in a manufacturing set-up, and sometimes the intent is merely to get at this IP. This kind of malware will not manifest itself by creating problems in your manufacturing set-up.

Automation World once reported: “The interesting thing about Dragonfly is that it targeted ICS information not for the purpose of causing down-time, but for the purpose of intellectual property theft. The potential damage could include the theft of proprietary recipes and production batch sequence steps, as well as network and device information that indicate manufacturing plant volumes and capabilities.”

The system solution to mitigating something like this is to implement secure boot for the main PLC CPU. This is a way of authenticating the firmware and only accepting software that has a valid digital signature. Depending on your requirements, the user could also encrypt the firmware. The security processing demands can easily overwhelm the MIPS of a traditional PLC CPU or even create latency issues. This is best done by off-loading the security functions to a low cost, off-the-shelf secure microprocessor that is built for these functions. The system shown here in Fig. 6 (below) uses an external secure micro to validate the firmware’s digital signature. 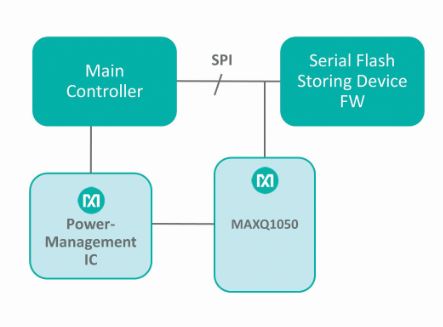 All the above examples use keys to enable authentication, but this raises the question of key protection. Physical security of an encryption key is of prime consideration in many applications since there is no security once the key is compromised.

To properly address physical security, several issues must be considered. These include a physical mechanism for generating random keys, a physical design that prevents covert electronic interception of a key that is being communicated between authorised agents, and a secure method of storing a key that protects against clandestine physical and mechanical probing.

Various secure key storage devices provide system designers with a host of features that range from package design to external sensor interfaces, and internal circuit architectures. These requirements were developed by the military in the form of the FIPS 140 standard, and many chip vendors such as Maxim Integrated provide tamper-proof capabilities that can be used in industrial control systems.

The future of IoT security

There may be other approaches to security as well, and as we begin to realise how important security is in a connected factories environment, we will eventually coalesce around a few approaches.

IIoT in manufacturing is in high demand, and is a growing trend. Security will also eventually grow to cover vulnerabilities, but the need is already here.

This paper was published in the proceedings issue of the Embedded world conference 2016.