Tackling the condensation in enclosure installations

A recipe for condensation is so simple it contains three elements: water vapour and fluctuating temperatures. In all but the most controlled of environments this means that electrical installations are at risk of water damage caused by condensation forming inside an enclosure. However, with proper planning and design it’s possible to protect your connections, as Chris Lloyd, Managing Director of Spelsberg UK, explained.

Firstly, it’s important to understand why condensation occurs and which types of electrical installation are most at risk. As we know, condensation describes the changing physical state of water from gas into liquid – typically caused by the gas coming into contact with a colder surface. So, condensation is a risk in any environment where water vapour will be found in the air and where temperature fluctuations occur.

While the water vapour content of air will vary from place to place depending on air pressure and temperature, it will be present in all but the most tightly controlled of environments. For example, when at sea level a volume of air measuring 30°C can contain up to 4 percent water vapour. As for temperature fluctuations, every electrical application generates heat and air temperatures naturally rise and fall throughout the day.

Despite understanding the simple premise of what causes condensation many designers and installers are guilty of overlooking the issue when working on a new installation, often incorrectly thinking that the IP rated enclosures they are working with will provide protection. IP ratings measure the ability of an enclosure to protect against ingress from solid particles and moisture (liquid rather than gas). Even an IP69 enclosures is not completely airtight, so will not protect against water vapour. 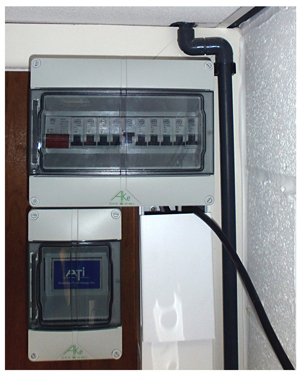 Once the installation is made and the enclosure is sealed the temperature differential between the air in the room and in the enclosure will lead to pressure changes, which in turn will draw moisture rich air into the enclosure. Once inside if the air contacts with the cooler enclosure walls condensation will occur and pool around the bottom of the enclosure. Ironically, this is a bigger problem for enclosures with a high IP rating, as it’s less likely that the water will escape the enclosure before causing harm to the electrics.

This isn’t to say that it’s impossible to combat against condensation. In fact with some basic planning during design, and by following a few simple rules during installation, there is no reason why condensation should impact on the integrity of your installation.

Enclosures specification is the first thing to consider, and will play a vital role in protecting your installation. Firstly, only specify an enclosure to the IP rating that is needed for the applications. Not only will you reduce installation time and save money, but, as explained above, this will reduce the risk of condensation build-up inside the enclosure. Enclosure dimensions should also be considered. While many designers may feel that tight packaging and a smaller footprint is the best option, it may be appropriate to design in extra space to allow for air flow. 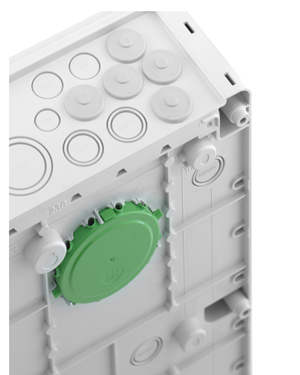 It’s possible to further design against condensation by adding ventilation. Most enclosure suppliers should be able to work with you during design to offer customisation to include air vents in an appropriate position on the enclosure.

Spelsberg has taken enclosures ventilation one step further with the AK Air range, which features an integrated ventilation system. The valves are designed into the enclosure walls to provide pressure and temperature regulation while still delivering IP65 protection – protecting against water spray from all directions.

Of course even the best enclosures can only provide so much protection, so it’s the job of good engineers to take simple measures during installation to further alleviate potential problems, for example:

Despite the ever present risk of condensation there is no reason why you shouldn’t be able to protect your connections from damage. Spelsberg engineers are often asked to examine instances where an installation has been damaged due to condensation build -up and it’s always easy to see how it occurred and offer a solution to combat it. Lloyd said he would always recommend working with an enclosure supplier who is able to offer engineering support and customisation capabilities to make sure that protection is designed into your solution from the start.