For centuries, legend and mystery has surrounded the seven wonders of the ancient world. Not least because only one of the seven structures (the Great Pyramid at Giza) is still standing - the others have been long lost in the myths of time. Indeed, the other six were destroyed (mostly by fire) long before photography or any renaissance artist could accurately capture what they looked like.

Therefore, what we know of ancient marvels such as the Hanging Gardens of Babylon, the Colossus of Rhodes and the Temple of Artemis is gleaned mainly from scriptures, carvings or ancient illustrations.

However, we are now slightly closer to understanding what one of these wonders would have looked like thanks to 3D printing. The technology has been key in creating a representation of the Statue of Zeus that is due to be on display for the first time in over 1,500 years. A specialist in the technology, Stratasys, teamed up with the Millennium Gate Museum in Atlanta to recreate the statue in durable UV resistant thermoplastic using a Fortus 900mc Production 3D Printer.

Building work commenced on the original statue in 422 BC, took 12 years to complete and stood 43ft tall. Modelled on the description of Zeus in Homer’s Iliad, the statue included intricate carvings of flora and fauna, and in one hand held a smaller statue of Nike, the winged goddess of victory, and in the other a sceptre topped with an eagle. However, by the fifth century the statue had been destroyed by fire, most likely in Constantinople (modern day Istanbul), preserved only in artist impressions like the one above and likenesses on coins.

Using fused deposition modelling (FDM) technology, the statue was brought back to life and was unveiled in Rio de Janeiro prior to the start of this summer’s Olympic Games. Digital sculpting program ZBrush was used for the design of the statue, which took around two months to complete. The printing of the statue then took a total of four days (some of which took place at Stratasys and some at Kennesaw State University). Jesse Roitenberg, National Education Manager at Stratasys commented: “Utilising 3D printers and software in different locations, we were able to complete an accurate representation of the ancient Zeus statue in just over a month.” 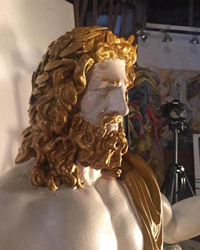 3D Printing has proven its worth in reviving works of art thought to be lost in time, such as in the ancient city of Palmyra, in Syria, which was looted by so-called Islamic State terrorists last year and had many of its ancient artefacts destroyed.

Jeremy Kobus, Director of The Gate Museum said: “Throughout history, there are always instances where the most precious works of art get destroyed or broken. In the past, this disappearance meant items were lost forever. That’s why we’re so heavily invested in the artistic value of 3D printing. Committed to working at the intersection of technology and art, we see the tremendous potential of 3D printing for educational applications. Alongside Stratasys and the educators at Kennesaw State University, our hope is to deliver creations far too few have even tried to attempt.”

Later this month the Millennium Museum will open an exhibit called, ‘The Games: Ancient Olympia to Atlanta to Rio’, where the new six foot replica statue of Zeus (right) will be the central attraction. “Artists around the world are being liberated by the fully fledged realism made possible by Stratasys 3D printing technology. Having the capacity to design and 3D print using highly durable materials with complex geometries and the highest levels of accuracy, museums can re-introduce some of history’s most treasured works. Teaming with Stratasys, institutions are completely transforming education and learning – as students and museum visitors are now able to grasp the power of forgotten classic art. 3D printing is the very impetus sparking a highly realistic learning experience – ensuring these essential pieces of history are never again forgotten,” added Sig Behrens, General Manager of Global Education, Stratasys.