All creatures great and 3D printed

Over the last few years the diversity of applications suited to 3D printing has known no bounds, from 3D printed aircraft to a whole host of medical solutions - where the technology has had a real impact particularly in recreating vital organs and helping amputees in the third world.

However, it’s not just humans that are taking advantage - the animal kingdom are beneficiaries as well as veterinarians are increasingly using the technology to recreate the lost limbs of animals of all shapes and sizes.

A school in Connecticut has recently teamed-up with a local aquarium and 3D printing firm, 3D Systems, to develop a 3D printed boot for an injured penguin. African penguin, Purps, (an endangered species) had been unable to walk properly after an altercation with another of the aquarium’s penguin residents in 2011 saw her tear a tendon in her left leg. Previous attempts to mould a cast for Purps failed due to them being too heavy however, this 3D printed version created using 3D Systems’ Pro’et MJP 5500x was able to create a lightweight orthotic boot. Purps (pictured above) is now able to climb over rocks, go swimming and do all the things that come naturally to her.

This is not the first time that 3D Systems have come to the aid of an animal in need. Last year the company created a 3D printed prosthesis for a dog with a congenital deformity which meant that he was born with very small forelegs and no paws. The prostheses consisted of attachment cups, rubber treads and rigid spokes which allow Derby to cope with any sort of terrain and surfaces. Derby is now able to walk with a straight back and sit normally.

On an even smaller scale, 3D Systems also came to the rescue of Stumpy the turtle who had to have a leg amputated following an injury. After the operation at the Oatland Wildlife Center in Savannah, California, the veterinary surgery then contacted the local school to design a 3D printed prosthesis which featured a holster with rolling wheels that gave Stumpy an entirely new range of movement.

Generally, animals adapt far more quickly than humans to the loss of (or injury to a limb) and as such, the instances where 3D printing has proved vital in rehabilitating and injured animal is growing.

Only recently a red-crowned crane (another endangered species) received a 3D printed upper beak implant at an animal hospital in Guangzhou, China. The birds, also known as Japanese cranes, are among the most aggressive in the species and this particular bird had its original beak broken in a fight with another crane. The titanium replacement has prompted comparisons with X-Men’s Wolverine! 3D printing ensured that the replacement beak matched the original exactly. The zoo has also reported that the bird has been able eat, drink and even catch small fish with its new titanium beak.

However, it’s not just limbs that can be recreated via 3D printing. Anyone with a dog will know that the route to a pooch’s heart is through its stomach. Imagine then, how 15 month old Labrador Hanna felt when a broken tooth left her in pain when she ate. However, a team of scientists and dentists at the University of Santos in Brazil were able to recreate the broken incisor using a 3D printed digital prosthetic in chromium and cobalt. 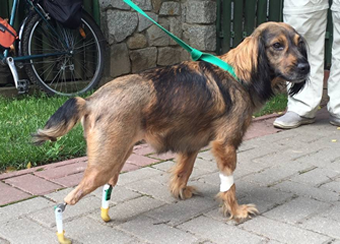 Continuing on the theme of man’s best friend, Shila (right), a dog from Lublin in Poland who lost both her hind legs in a tragic lawnmower accident, has been able to walk again following pioneering surgery using 3D printed replacement limbs. Preparation for the operation took three months, but vet Ryszard Iwanicki, who oversaw Shila’s treatment, has stated that she is getting used to her new limbs and she is now even trying to scratch behind her ears!

These are just a handful examples where pets and wildlife have benefited enormously from 3D printing technology, with the bigger picture reading like a real life Doctor Doolittle type list with individual stories of goats, sheep, chickens, cats, cockatoos and lizards all having some form of recent reconstructive surgery using the technology, indicating that it has a key role to play in the future of animal welfare.

If only James Herriot had access to such innovative technology… All Creates Great and Small would have been a very different story!