The power of the port 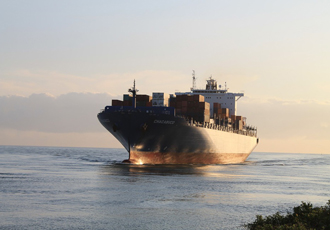 From forest to fuel
The delivery of fuel has one of the biggest effects on businesses and society. The journey begins in vast working forests in the US, where huge masses of wood pellets are loaded onto container ships for a transatlantic journey.  When the ships pull into ports in the UK, these wood pellets are removed from the ship’s hold and transported onto conveyor belts, before being loaded onto a train.

This process operates like clockwork. In fact, the four major biomass fuel ports in Britain process up to 12 million tonnes of biomass every year combined.

From here, the trains carry large loads of pellets to the designated power stations across the country. Once at the final destination, conveyor belts carry these wood pellets from rail storage domes and into the furnace. The pellets are then combusted, which boils water to create steam that turns a generator, and hey presto, we have power.

Investment opportunity
Power stations rely on this seamless transportation process to operate, so it makes sense for a power station to invest in this delivery and distribution infrastructure. Several power stations have done just that, including a large 2017 civil engineering project, which saw a total of £300m invested into infrastructure of a well know port in the North-East of England.

The relationship between port and power station is more important than ever before. Ports handle millions of tonnes of fuel, from coal to wood pellets every year. Therefore, if anything were to go wrong at the port, it would have huge knock-on implications for the power station later down the line.

With ambitions for improved energy security, environmental sustainability and an increase in jobs, it could be argued that it is crucial that the infrastructure of ports, an essential part of the energy supply chain, is reinforced.

Ironically, it is the power supply of ports in Britain that will be a huge factor in this investment. If the port is without power, the conveyors will be down, and power stations could be without fuel. So, what kind of investments and systems are being put in place to prevent this potential cause of down-time?

Most facilities will have some sort of UPS system in place, a back-up power system that uses charged up batteries. However, the duration of autonomous power supply will vary depending on the UPS product.

As part of a larger infrastructure investment, CP Automation recently installed a Riello 3/1 phase UPS system at 40kVa at one bustling UK port to improve the duration of its power supply. But first, the company needed to determine the correct UPS system for its site.

Choosing the right UPS system
Before implementing a new UPS system, the installer needs to determine whether the customer needs a single- or 3-phase UPS. This requires examining the loads the UPS will protect and assessing voltage range or kVa value. Generally, loads of 20kVA or less can safely use a single-phase UPS, whereas larger loads will likely need a 3-phase UPS.

In 3 phase systems, the power circuit combines three alternating currents that vary in phase by 120°. As a result, the power would never drop to zero, making it possible to carry more load, delivering more pellets to the power plant, more quickly.

Most businesses choose a 3/3 phase UPS, but for an application used to keeping critical equipment in a port up and running, it could be argued that a longer UPS duration is needed.

With this in mind, CP Automation installed a Riello 3/1 phase UPS system at 40 kVa to improve the ports power supply, complete with 80 rechargeable batteries. This provided the port with 1.5 hours of power autonomy during power outage, much longer than it would have been if a 3/3 UPS alternative has been chosen.

The batteries are charged by the rectifier; so that if mains power fails, the UPS uses this energy source to power the inverter. This means the associated power stations waiting on fuel supplies do not feel the effects of unplanned power outages at the port.

CP Automation also installed active harmonic filters at the site to mitigate harmful harmonics at the facility. A total of six Comsys ADF P300 Active Filters were fitted to ensure the harmonics from all the variable speed drives (VSDs) on site were eliminated.

With this type of investment, whether by the port itself, or the associated power stations, the power station should see rapid return on investment (ROI) generated by decreased downtime and reduced delivery hold ups.