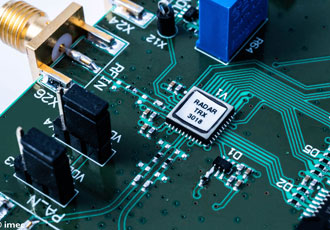 This week at the 2019 International Solid-State Circuits Conference (ISSCC2019), imec will be announcing its radar transceiver designed as an efficient, low cost solution for presence detection in smart building solutions. The power consumption of the radar is below 1mW, which is 100 times lower than other solutions, and is capable of detecting even micro-movements from human respiration, up to a distance of 15 metres.

This performance makes it a suitable solution for low cost battery-powered presence-detection and people counting applications in offices, hospitals and on industrial sites. The new 8GHz UWB radar was developed by imec the Netherlands (within the framework of Holst Centre, Eindhoven).

Similar as camera, radar can build a picture of its environment. While cameras are especially good at 2D images, radar is well suited for detecting movement and distance. Consequently, it is a suitable fit with human motion and activity detection.

In many circumstances, radar sensors are better suited than cameras for presence detection, people tracking or activity classification. That is for example the case when privacy considerations are key, such as in office spaces, hotel rooms, or hospitals.

Another advantage is their robustness to suboptimal light conditions. Different from camera, radar can robustly detect micro-movements due to respiration or heartbeat.

However, current commercial radars use too much power, and often require more expensive semiconductor technologies. This makes them unsuited for low cost and battery-powered operation. Imec’s new transceiver has been specifically designed with these requirements in mind, making it a breakthrough for presence detection applications.

The new transceiver is compliant with FCC and ETSI spectral regulations for the UWB frequency range, limiting the radiation to -41dBm/MHz. This energy density is well below the noise floor of mainstream commercial systems, and therefore, this radar can safely be used for 24/7 people presence detection without health concerns.

The power consumption of the transciever IC is less than 1mW, at least 100 times less than comparable solutions. With that, it is able to discern movements and vital signs - breathing and heartbeats - up to 15 metres, which is a record for UWB radars. The imec chip was designed in standard 40nm CMOS and has a die size of 1.8mm2.

“With the new transceiver, we have an exceptional tool to create innovative smart building applications such as presence detection, people counting, fall detection, activity classification and even non-contact vital signs monitoring. This 8GHz radar builds on a tradition of other pioneering devices that imec is developing in the framework of its radar IC programme for low cost and low power radar technologies based on standard CMOS technology.

“Together with our novel sensor fusion algorithms, our offering opens up completely new opportunities for remote sensing in various fields such as automotive, smart buildings and human-machine interaction. We invite interested companies, chip designers and application developers, for licensing of this technology or participation in the imec R&D programmes.”