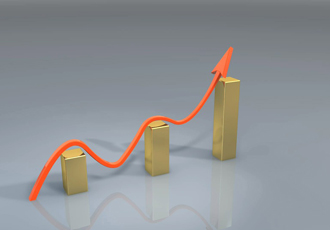 Double digit percentage sales growth in power transistors strengthened last year, climbing 14% in 2018 to reach an all time high of $16.3bn after setting the previous record in 2017 with an 11% increase, according to IC Insights’ 2019 O-S-D Report - A Market Analysis and Forecast for Optoelectronics, Sensors/Actuators, and Discretes.

Strong growth momentum in power transistors carried into the first quarter this year with worldwide sales rising nearly ten percent compared to the same three month period in 2018, but the rate of increase is expected to slow substantially in the second half of 2019 with shortages of parts ending in most market categories, according to the 350-page O-S-D Report. 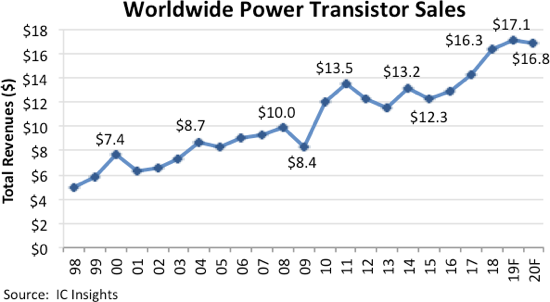 In the past two years, power transistor revenues have been driven higher by a combination of strong unit shipments and increases in prices that resulted from shortages of devices and not enough manufacturing capacity to keep up with demand.

Power transistor shipments grew eight percent in 2018 to a record high 62.8 billion devices after rising nine percent in 2017, according to IC Insights’ 2019 O-S-D Report, which is forecasting a six percent increase in unit volume this year to 66.7 billion worldwide. Average selling prices for power transistors increased nearly six percent in 2018 with delivery lead times for some widely used parts - such as power MOSFETs - exceeding 40 weeks in the second half of last year compared to eight weeks in normal market conditions.

Power transistor makers have steadily added manufacturing capacity in the past year, but most suppliers were still trying to catch up with demand in the first quarter of 2019. Tight supplies of most power transistor product types are expected to end in the second half of this year, partly because of a slowdown in the global economy and lower growth in demand for device shipments toward the start of 2020. If unresolved, the growing trade-war between China and the US could also negatively impact the transistor market in 2019.

After the two year double-digit growth bubble in 2017 and 2018, the power transistor market is expected to settle back to more-normal increases in the mid-to-low single-digit percentage range during the next five years, with the exception of a two percent drop being forecast in 2020 by the O-S-D Report. Power transistor sales are projected to rise by a Compound Annual Growth Rate (CAGR) of 3.3% between 2018 and 2023, when worldwide revenues are projected to reach $19.2bn.