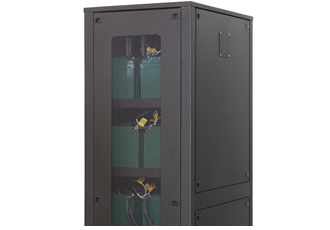 “While mainstream use of lithium-ion batteries is relatively new to the data centre, we have been engineering UPS solutions with lithium-ion battery backup for customers for some time,” said Peter Panfil, Vice President of global power, Vertiv. “By offering lithium-ion configurations from multiple suppliers, we are providing a broad spectrum of battery technologies that have been vigorously tested for safety and performance in multiple applications and environments.”

The benefits are substantial. Lithium-ion batteries are considerably smaller and lighter than VRLA counterparts, significantly reducing the footprint of the battery cabinets and in some cases enabling in-row battery storage. Additionally, some lithium-ion batteries can function at higher operating temperatures than VRLA, which can reduce battery cooling costs – in some cases, by as much as 70%.

Perhaps most importantly, depending on chemistry and utilisation, lithium-ion batteries can last as much as four times as long as VRLA, and routinely last two to three times as long. In most cases, VRLA batteries would need to be replaced multiple times before the first replacement of a lithium-ion battery. That’s significant when you consider the greatest cost and nuisance factor associated with UPS batteries is replacement.