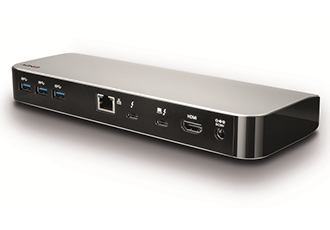 Following the launch of the new Thunderbolt product portfolio, Lindy is presenting a new Active Thunderbolt Three Docking Station. With Thunderbolt Three’s 40Gbps data rate a single 5k, or two 60Hz 4k monitors, can be connected to the docking station. This device also provides gigabit Ethernet and USB 3.1, as well as an active power supply up to 60W to charge any connected devices.

The focus is on users who want to combine the comfort of a high performance workstation with the flexibility of a laptop. In large company’s users often faced the choice of either using a classic manufacturer and model-specific docking station or a USB docking station. However, the latter in particular quickly reached their limits when it came to graphics. Dual 4K resolutions is impossible when using USB alone.

Thunderbolt Three manages to create a scenario where it can provide a unified interface to quickly and flexibly upgrade mobile workstations into fully featured desktop devices. Whether at a workplace, conference room or in a home office, being able to create a feature workspace experience with a simple plug-and-play set up is a flexibility that is not only convenient but is required in a modern work environment.

In addition to the two Thunderbolt ports, the docking station offers five additional USB 3.1 (type A) jacks, two on the front and three on the back, a 3.5mm jack for 2.1 audio/micro, an SD card reader and gigabit Ethernet.

An additional HDMI port allows for the connection of a second monitor, if the first was connected directly via Thunderbolt.

Thunderbolt Three has taken a big step forward in becoming a more commonplace interface. With Thunderbolt, the goal is to transfer image, sound, data and power via a cable. With 40Gbps bandwidth native graphics signals can be routed through the Thunderbolt cable in parallel with data transfer. The computing power for the graphics is therefore not in the docking station but natively on the graphics card in the notebook instead.

Currently, both USB Type C and Thunderbolt Three support the Power Delivery Standard. With high voltages up to 20V and amperage up to 3A, the Lindy Docking station can deliver up to 60W of power to connected devices.

The docking station supports the full bandwidth of Thunderbolt Three and uses the original Intel Alpine Ridge 4C chipset. Both Thunderbolt Three ports on this device are bidirectional. Both the HDMI output (HDMI 2.0) and the Thunderbolt output are HDCP 2.2 compliant for the distribution of HDCP 2.2 signals. In addition to any audio signals embedded within the video signal, sound and micro can also be connected separately via a four segment 3.5mm jack port.

The docking station measures 155x85x23mm, has an aluminium/plastic housing and has a power consumption of 135W at full capacity.

As an alternative to the full-featured docking station, Lindy offers two active dual-monitor adapters that are limited to the graphical capabilities of Thunderbolt Three. These are two adapters that output a Thunderbolt Three signal to two DisplayPort or HDMI outputs. Both outputs support full 4K at 60Hz. As with the large docking station, alternatively only one monitor with 5K resolution can be connected. The power supply of these adapters is via the Thunderbolt interface.