Two of the best startup innovations of 2016

On 22nd June at the AUTOMATICA trade fair, a new non-rotating simultaneous multi-axis scanner and an intelligent robotic suitcase were named the best startup innovations of 2016 in the categories industry automation and service robotics. Trade fair visitors can still experience these and other outstanding products in the STARTUP WORLD at AUTOMATICA in Munich until 24th June. 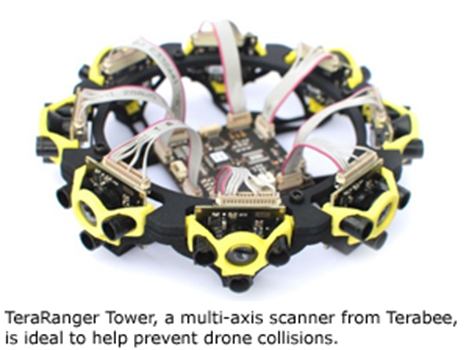 In the TeraRanger Tower, the French startup Terabee has developed the very first scanner to utilise multiple static sensors rather than conventional rotating or mechanical elements. The advantage of this approach is that it requires no motor, which makes the TeraRanger Tower both virtually silent and highly resistant to wear. This non-rotating simultaneous multi-axis scanner has a great deal of potential to replace common lidar scanners. It uses infrared time-of-flight (3D systems that measure distances using the transit time technique) that have low energy requirements and are 100% eye-safe. Weighing just 130g, the TeraRanger Tower is particularly suited to applications on lightweight and fast moving robots. Possible areas of use include simultaneous localisation and mapping (SLAM) and collision avoidance for robots of this type, including drones. 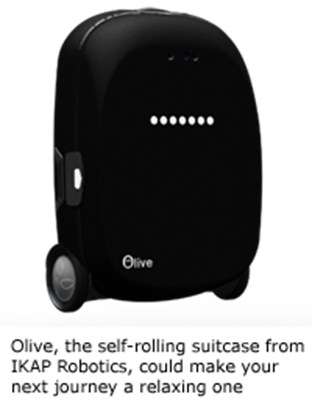 Olive: an intelligent suitcase
The robotic suitcase Olive, which is currently being developed by Iran's startup IKAP Robotics, is designed to make travelling more relaxing and convenient. In addition to simply following the owner around on its own, its self-balancing, two-wheel system can be used for personal transport, much like a Segway. Meanwhile, its 3D image processor and proximity sensors ensure its ability to get around without running into things. To keep its weight manageable, Olive's outer shell is made of carbon. It also sports a 10,000mAh battery and a USB port for charging mobile devices. Through a corresponding app, users can communicate with the suitcase, as well; to find its exact location on a map, determine its current weight, operate its digital lock, or notify emergency services in dangerous situations, for example. Ranked second was the German Toposens GmbH with its novel 3D ultrasound sensor in the automation category and the US-based FoldiMate with a robotic laundry folding machine for homes in the service robotics category. The third place in each of the two categories was awarded to the German TruPhysics GmbH for its TruPhysics Simulation Suite and to the Danish startup Blue Ocean Robotics for its UV-Disinfection-Robot for hospitals and industry applications.

The STARTUP WORLD Award at AUTOMATICA 2016
The 2016 STARTUP WORLD competition recognised the year's best product innovations from startups working in virtually every field of industry automation and service robotics. Entrants from numerous European countries, as well as the United States, Russia, and Iran submitted ideas spanning a wide range of application areas, from sensors and software to medicine and healthcare, tourism, and household appliances. A jury of experts chaired by Falk Strascheg, founder of the Strascheg Center for Entrepreneurship gGmbH, was tasked with identifying the 20 best products and then selecting three finalists in each of the two categories: automation and service robotics. The winners in both categories were announced on Wednesday at the AUTOMATICA Forum. Opening the awards ceremony were the initiators of STARTUP WORLD, Messe München managing director Falk Senger and Thorsten Rudolph, CEO of AZO. The prizes were presented to the best product innovations of 2016 by Falk Strascheg. At AUTOMATICA 2016, attendees, potential investors, and customers can meet with ambitious startups from around the world and experience their exciting product innovations up close in hall B4. The networking area of the STARTUP WORLD also offers space for sharing ideas with the talented finalists in the competition for the STARTUP WORLD Award. Meanwhile, the event's stage features discussions and pitches on specific opportunities to cooperate with both startups and more established companies.