The electronic tattoo craze has exploded with a plethora of e-skin technologies from all over the world, furthering the technology and spinning off new functionalities. Nicolette Emino explains.

Five years ago, engineers led by Professor John A. Rogers from the University of Illinois at Urbana-Champaign made a breakthrough in electronics by developing a device platform that combined electronic components for sensing, medical diagnostics, communications and human-machine interfaces on an ultra-thin skin-like patch. The patch was compared to a temporary tattoo.

The prototype device was said to have potential applications in wearable and biomedical electronics, and since then, the electronic tattoo craze has exploded.

Recently, a group of engineers from MIT’s Media Lab recently unveiled a new technology called DuoSkin, a process that allows anyone to create customised functional devices that can be attached to the skin like temporary tattoos.

The everyday wear devices could be used for on-skin touch input, displaying output and wireless communications. In essence, the researchers turned a human body part into a touchscreen display.

Earlier this year, scientists from the University of Tokyo demonstrated their flexible electronic e-skin displays using processes similar to those in OLED displays. And then there was the new nanotech tattoo developed at Tel Aviv University that could measure the activity of muscle and nerve cells to map human emotions.

That’s just the beginning - a simple internet search will put you just a finger-click away from a variety of other e-skin developments that have been taking place over the last five years.

So what’s with the trend and influx of electronic tattoo technology? This trend can be greatly attributed, not only to the breakthrough work by the Rogers Research Group from the University of Illinois at Urbana Champaign, but to the worldwide increase in material engineering and the expansion of flexible electronics, like the small flexible circuits within the tattoos themselves – electronics thinner than a human hair that possess the same bendy stretch properties of skin.

Epidermal electronic systems (EES) as they are scientifically referred to, stay on the skin via ‘adhesion forces’ between the tattoo and the atoms on the skin – the kind of forces that play a role in how bugs can walk upside down on the ceiling.

Miniature flexible electronics
Flexible electronics technology involves the assembling of electronic circuits by mounting electronic devices onto flexible plastic substrates like polyimide, PEEK or transparent conductive polyester film. Flexible electronic assemblies can also be manufactured utilising identical components that are used for rigid printed circuit boards, allowing the board to conform to a desired shape, or to ‘flex’ during use.

Typically, flex circuits have been used as connectors in applications where flexibility, space savings or production constraints limit the use of rigid circuit boards or hand wiring. For example, they are found within the automotive industry, used in instrument panels, under-hood controls and

ABS systems, as well as in computer peripherals as the moving print head of printers and to connect signals to the moving arm carrying the read/write heads of disk drives.

The technology is furthering the industry even more thanks to miniaturisation capabilities. By shrinking down the flex circuits, researchers are able to incorporate them into these tiny e-skin tattoos that can bend with the motion of the human body. 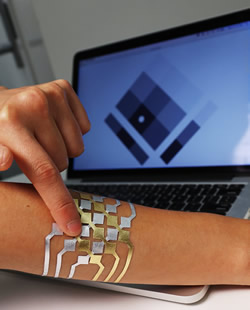 Essentially, the tattoos are similar to what we’ve discussed so far - a series of biosensors poised on human skin. Chaotic Moon’s tattoo contains an ATiny85 microcontroller which supplies data from temperature sensors with the help of an electroconductive paint.

There’s even been a buzz about using tattoos for secure payment applications. With so much energy put into the development of the technology, we can imagine that there are some other special applications for these e-tattoos.

“The vision is to exploit these concepts in systems that have self-contained, integrated functionality, perhaps ultimately working in a therapeutic fashion with closed feedback control based on integrated sensors, in a coordinated manner with the body itself,” said Rogers, back in 2011 at the time of the initial discovery.

Flexible and stretchable electronic skin tattoos are receiving more and more attention and we’re seeing that they may just be the next big thing in electronics.