The University of Huddersfield’s facilities in accelerator science have led to it becoming a partner in a new £8.8m centre that will boost UK and European ion beam research, leading to breakthroughs in fields that range from nuclear safety and chemical analysis to minute power sources for personal devices. Newly launched is the UK National Ion Beam Centre (UKNIBC), funded by the Engineering and Physical Sciences Research Council (EPSRC).

It is a collaboration between the Universities of Huddersfield, Manchester and Surrey, all of which have important infrastructure for ion beam modification and analysis.

Huddersfield, which is home to the International Institute for Accelerator Applications (IIAA) has two major facilities – the UK Medium Energy Ion Scattering facility, known as MEIS, and MIAMI 2 (Microscope and Ion Accelerator for Materials Investigation), that combines ion beam bombardment with an electron microscope.

The establishment of UKNIBC will mean that all researchers who have secured EPSRC funding for their work will have access to the facilities at Huddersfield and the other centres, at no cost to themselves. 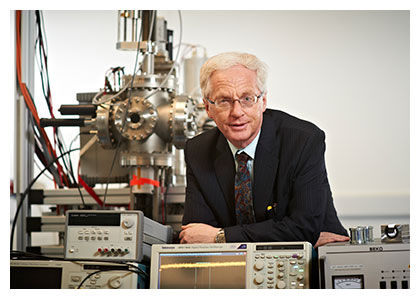 At the University of Huddersfield, Professor Roger Barlow (pictured), who heads the IIAA, and Professor Steve Donnelly, who developed MIAMI, are board members of the new collaborative centre. Its launch was marked at the Fifth Huddersfield Annual Accelerator Symposium, attended by more than 45 researchers and featuring papers dealing with diverse aspects of analytical research that deploys ion beams.

“The talks at the symposium showed what an amazingly wide field this is,” said Professor Barlow. “For example, there are people using ion beams to study the metals that live at the heart of some proteins – something that X-ray diffraction can’t see but the ion beams can. And there are researchers looking at the long-term survival of materials for fusion reactors, and everything in between.”

Papers also covered topics such as the catalysts used in chemical engineering processes and the manufacture of very small power sources for wearable device, using thermoelectrics instead of batteries.

The symposium opened with presentations that described the ion beam facilities at the University of Surrey – which is lead partner in UKNIBC – and the Dalton Cumbria Facility of the University of Manchester. Professor Donnelly discussed Huddersfield’s MIAMI, and Professor Jaap van den Berg spoke about MEIS.

The programme and the presentations are available at the symposium website. Although the UK National Ion Beam Centre is initially aimed at EPSRC-funded and therefore UK-based researchers, it is intended to secure funding from an EU transnational scheme that will enable overseas scientists to visit and use the four facilities