Home > News & Analysis > The key to stop you getting board
Analysis

The key to stop you getting board

The Model 01's enclosure is sculpted from two blocks of solid maple that are a joy to rest hands on. Instead of shallow, uncomfortable keyswitches, it use gloriously tactile mechanical keyswitches similar to those found in the original Apple II.

The company has custom-sculpted each of the 64 individual keycaps on the Model 01 to gently guide your fingers to the right keys. After putting it all together, the result is a keyboard that is a pleasure to type on all day and all of the night.

There's an old keyboard-nerd joke that goes something like this: "If alien archeologists landed on Earth a million years from now and tried to figure out what we looked like based on our keyboards, they'd probably figure that we had 10 tentacles coming out of our chests." The traditional staggered QWERTY layout was not designed for humans.

That being said, it's important to the creators that the Model 01 not feel too alien today. That's why they've based the default key layout on QWERTY. They've made some important changes, though: they've aligned the keys in columns so its easier to reach without having to contort your fingers. The two halves of the keyboard are angled to help keep wrists in a more natural, neutral position. (The standard keycaps will have QWERTY legends; if  users prefer blank keycaps they can choose them as an option on their backer survey.)  We're experimenting with a version of blank keycaps with a translucent dot in the middle, so users still get the most out of the nice glowing effects.

However, hands and work setup aren't necessarily the same as the Model 01, so the creators designed the keyboard to be easy for users to adjust and customise. The two halves of the keyboard are joined together by a center bar. The Model 01 will come with both a flat bar and a 'tented' bar. Publishing the mounting specification, users will be able to build their own center bar, too. 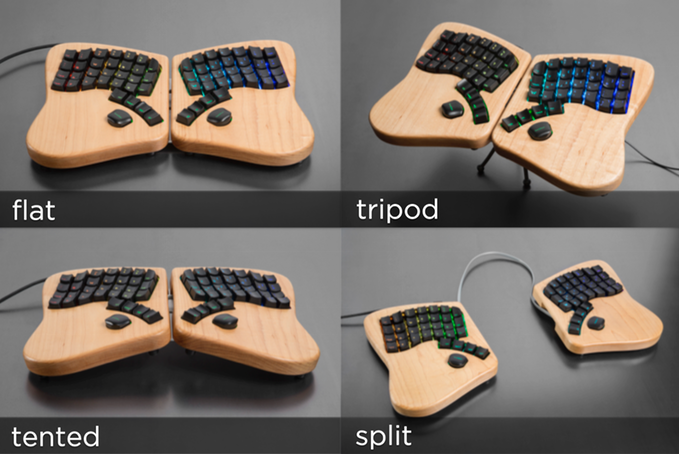 The company placed an independently programmable RGB LED underneath each and every key on the keyboard. Out of the box, the Model 01 can breathe, glow and do cute rainbow fade animations with the best of them, but the neat part is that each and every one of those LEDs is end-user controllable. With just a few lines of code in the Arduino IDE, users can completely customise the light show. Want your keyboard to start flashing red when you've been typing too long? No problem! Want to have your keyboard start spelling out your instant messages as they come in? Well, that'll be a little bit of code, but it's completely doable.

The keyboard is currently being funded on kickstarter.