Home > News & Analysis > Slowing in 2019 for GDP and semiconductors
Analysis

Slowing in 2019 for GDP and semiconductors

Growth in the global economy is expected to slow in 2019 from 2018. Ten economic forecasts released in the last two months show the percentage point change in World GDP from 2018 to 2019 ranging from minus 0.1 points to minus 0.4 points.

The chart below compares Semiconductor Intelligence’s latest forecasts with other recent forecasts. The consensus is the 2018 semiconductor market will finish with about 15% growth. All sources expect a significant growth slowdown in 2019. Most are in the three to five percent range in 2019. UBS projects a 4.3% decline in 2019 primarily due to a downturn in memory. 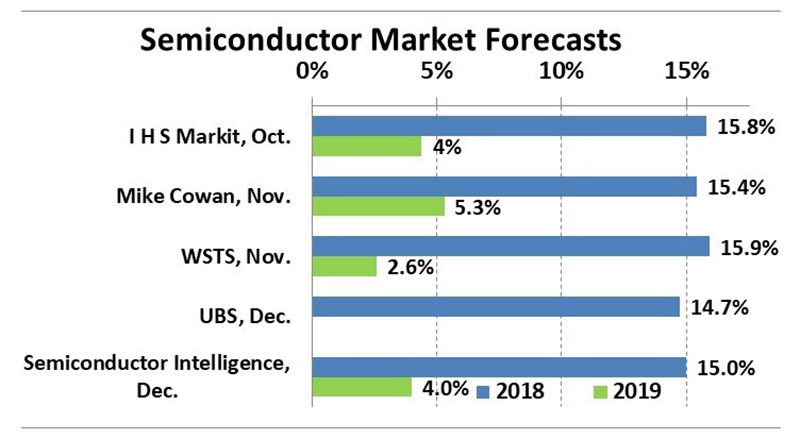 There are considerable downside risks to the forecast. Global GDP risks include the US-China trade issues, Brexit, and rising interest rates. On the semiconductor side, the memory market downturn may be more severe than the flat market projected by WSTS.

Previous booms in the memory market have usually been followed by double digit declines. However, since the significant memory suppliers have been winnowed down to three in DRAM and six in flash memory, the decline should not be as extreme as in previous cycles.

The traditional major end equipment drivers of the semiconductor market such as PCs and mobile phones have shown little growth in the last few years. Semiconductor Intelligence will attend CES 2019 in Las Vegas next month to look at emerging drivers of electronics and semiconductor growth.