As 2019 gets underway, IC Insights is in the process of completing its forecast and analysis of the IC industry and will present its new findings in The McClean Report 2019, which will be published later this month. Among the semiconductor industry data included in the new 400+ page report is an analysis of the top-50 semiconductor suppliers.

As shown, the top five, top ten, and top 25 companies’ share of the 2018 worldwide semiconductor market increased 14, 15, and 11% points, respectively, as compared to ten years earlier in 2008. With additional mergers and acquisitions expected over the next few years, IC Insights believes that the consolidation could raise the shares of the top suppliers to even loftier levels.

There was a wide 66% point range of year-over-year growth rates among the top 50 semiconductor suppliers last year, from +56% for Nanya to -10% for Fujitsu. Nanya rode a surge of demand for its DRAM devices to post its great full-year results. However, evidence of a cool down in the memory market last year was evident in the company’s quarterly sales results, which saw its sales drop from $826m in 2Q18 to $550m in 4Q18 (a 33% plunge).
Overall, four of the top seven growth companies last year (Nanya, SK Hynix, Micron, and Samsung) were major memory suppliers. Although Nanya registered the highest percentage increase, Samsung had the largest dollar volume semiconductor sales increase, a whopping one-year jump of $17.0bn! 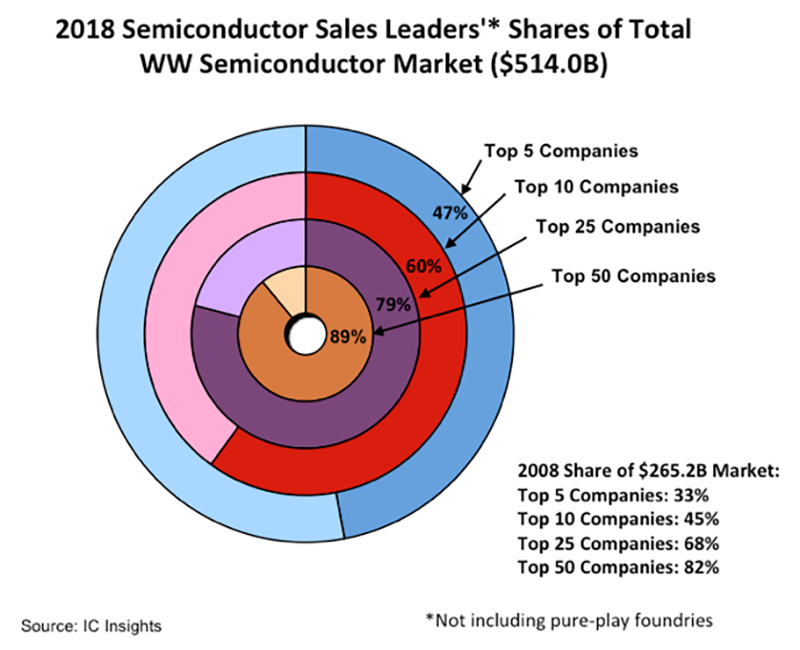