In Singapore the second phase of Heliatek's large pilot installation of its award-winning has been successfully completed. Now being rigorously tested under the tropical weather conditions of Singapore is HeliaFilm, to provide new urban fit energy solutions for the ever growing cities of Asia.

It has further expanded with more HeliaFilm installed on various façade and roof elements, and is already the largest BIOPV (Building Integrated Organic Photovoltaic) project in Asia.

Covering the Seletar Aerospace walkway with solar film during the first phase last year, HeliaFilm has now been installed on approximately 200m² in JTC's Cleantech Park I and II with a peak power of more than 10kWp.

Continuous monitoring is performed by the Solar Energy Research Institute of Singapore (SERIS), and the gathered data again proves the unique feature of HeliaFilm i.e. its performance is stable at high temperatures and non-optimal orientations unlike conventional solar panels. The project continues until mid- 2017.

"This pilot is a successful example how HeliaFilm can become a truly green and urban fit energy solution for sustainable city development. The unique technology advantages of HeliaFilm for distributed generation of solar energy in tropical climates provide new ways for Singapore to become a green city," stated Thibaud Le Séguillon, CEO of Heliatek. "We are progressing steadily with our worldwide pilot projects towards the large industrial roll out of HeliaFilm. This Singapore project is an important milestone in this process." 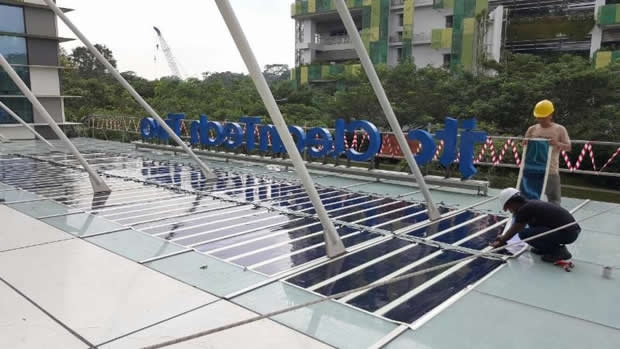