Based out of NASA's Goddard Space Flight Center in Greenbelt, Maryland, the Near Earth Network (NEN) serves as a conduit for information from spacecraft in low-Earth orbits, geosynchronous orbits, and even lunar orbits to the scientists who will study and use it on the ground. An orbiting observatory such as the Hubble Space Telescope collects huge amounts of data continuously, including both science observations and spacecraft health information, such as battery voltages and operational data.

The missions of the Hubble Space Telescope and other satellite missions are not complete unless science observations and spacecraft health data are returned to the earth and processed. There are no internet hook-ups, phone lines, or fiber optic cables in space to route the data to earth.

Large antennas placed at numerous longitudes and latitudes around the world connect with much smaller antennas onboard the spacecraft as they pass overhead. Once received by ground stations, the information is distributed worldwide to stakeholders continuing their important science work and engineers evaluating how well the satellite is operating.

The ground stations receive data stored on spacecraft hard drives, which have a much smaller capacity than necessary to store a satellite's lifetime of data. This data passes through a communication system that is capable of distributing it around the world to those in need of the data. 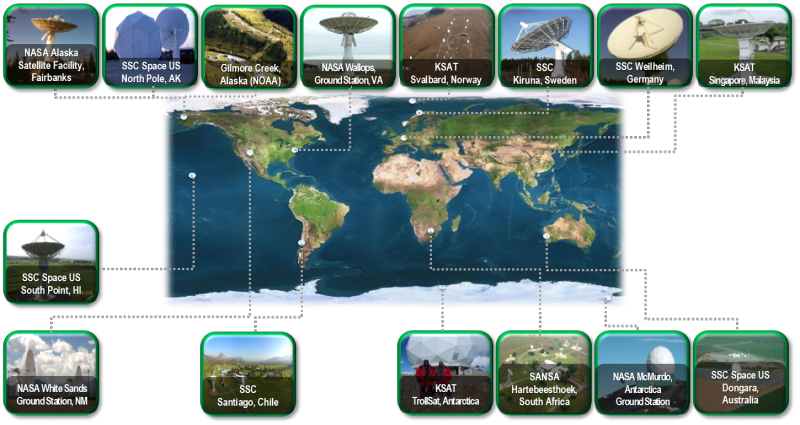 This image maps Near Earth Network ground stations currently in use in 2016. Credit: NASA

This is a huge responsibility with the more than 40 NEN spacecraft customers in orbit from 99 to 22,000 miles above Earth's surface and even in orbit around the moon. The team must ensure no two spacecraft are scheduled to connect with an antenna at the same time, which could overwhelm the system.

If a pass is missed, the team must reschedule the pass for another ground station in the area while they ensure the antenna is ready to receive new data. Sometimes changing the location of a pass is not possible, and the spacecraft must hold onto its data for another pass.

Over the course of a year, the NEN receives data from more than 54,000 passes, a dramatic increase from when the NEN was first established as the ground network more than 50 years ago during the Apollo era.

Today, NEN engineers and operators face the challenge of keeping up with the heady pace of advancement of modern communication technology. As more and more spacecraft are launched and the need for higher rates of reception increases, the network must evolve to accommodate the increased demands.

The capability of the NEN is increasing with the recent installment of a new antenna in Alaska and plans to install several antenna in the southern hemisphere. The team is also developing new capabilities that will increase bandwidth and allow the network to keep up with growing data demands as new missions are launched.

The team is already looking at a new challenge that will exponentially increase transmission capability. Using lasers to send data optically from customer spacecraft to our network assets greatly expands the bandwidth. Carter said it is the next step in satellite communications efforts, and the team is already preparing to take it on.

NASA's Space Communications and Navigation program, part of the Human Exploration and Operations Mission Directorate at the agency's headquarters in Washington, is responsible for all of NASA's space communication activities. The NEN is managed, operated and maintained at Goddard. Team members are located at the Greenbelt and Wallops campuses.

The NEN is currently augmenting its ground station network to provide communication services for future spacecraft. Future users will include NASA's newest heavy lift vehicle, the Space Launch System (SLS), and the Orion spacecraft that will carry astronauts into deep space on the journey to Mars.