European semiconductor sales up 28.7% in January

This represents a 3.4% growth compared to the December 2021 total of $4.3bn and makes Europe the only region exhibiting month-on month growth in January. On a worldwide basis, semiconductor sales in January 2022 were $50.8bn, down 0.2% versus the previous month and up 26.8% versus the same month in 2021.

Figures are based on the latest report from the World Semiconductor Trade Statistics (WSTS) and represent a three-month moving average.

The steady growth of the European market in January versus December was supported by growing demand in most product categories, with discretes (+5.9%) sensors (+4.6%), and analogue devices (+4.3%) performing particularly well. The memory market in Europe also grew strongly in January (+4.6%).

In January, exchange rate effects on the European sales picture continued to be visible when comparing market growth in Euros and in Dollars. Measured in Euro, semiconductor sales were €3.9bn in January 2022, up 4.2% versus the previous month and up 36.7% versus the same month a year ago. On a year-to-date (YTD) basis semiconductor sales increased by 34.3%. 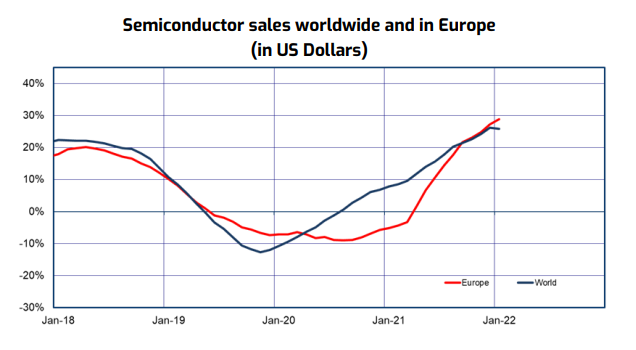 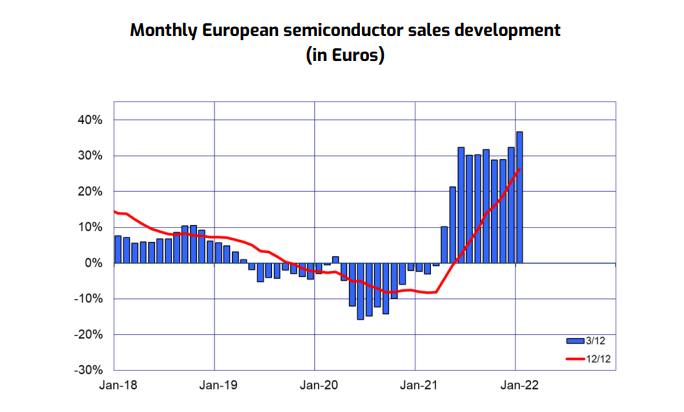