A team of scientists from the Moscow Institute of Physics and Technology (MIPT) have created prototypes of "electronic synapses" based on ultra-thin films of hafnium oxide (HfO2). These prototypes could be used in fundamentally new computing systems. The paper has been published in the journal Nanoscale Research Letters. The group of researchers from MIPT have made HfO2-based memristors measuring just 40x40 nm2.

The nanostructures they built exhibit properties similar to biological synapses. Using newly developed technology, the memristors were integrated in matrices—in the future, this technology may be used to design computers that function similarly to biological neural networks.

Memristors (resistors with memory) are devices that are able to change their conductivity depending on the charge passing through them, and they therefore have a memory of their "history".

In this study, the scientists used devices based on thin-film hafnium oxide, a material that is already used in the production of modern processors. This means that this new lab technology could, if required, easily be used in industrial processes.

"In a simpler version, memristors are promising binary non-volatile memory cells in which information is written by switching the electric resistance – from high to low and back again. What we are trying to demonstrate are much more complex functions of memristors – that they behave similar to biological synapses," said Yury Matveyev, the corresponding author of the paper, and senior researcher of MIPT's Laboratory of Functional Materials and Devices for Nanoelectronics, commenting on the study. 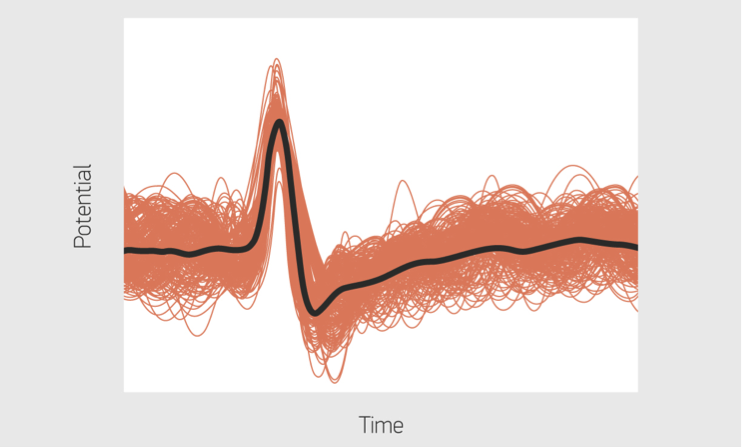 The type of electrical signal transmitted by neurons (a “spike”). The red lines are various other biological signals, the black line is the averaged signal. Credit: MIPT press office

From the physical point of view, synaptic "memory" and "learning" in the brain can be interpreted as follows: The neural connection possesses a certain "conductivity," which is determined by the previous "history" of signals that have passed through the connection.

If a synapse transmits a signal from one neuron to another, we can say that it has high "conductivity," and if it does not, we say it has low "conductivity." However, synapses do not simply function in on/off mode; they can have any intermediate "weight" (intermediate conductivity value). Accordingly, if we want to simulate them using certain devices, these devices will also have to have analogous characteristics.

As in a biological synapse, the value of the electrical conductivity of a memristor is the result of its previous "life" from the moment it was made. 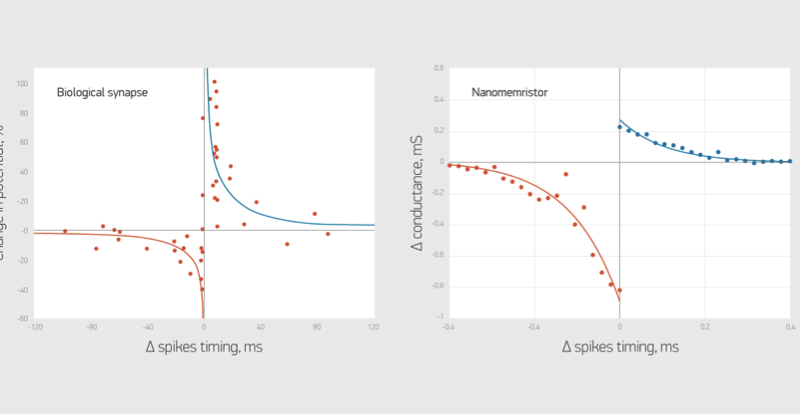 The change in conductivity of memristors depending on the temporal separation between "spikes"(rigth) and thr change in potential of the neuron connections in biological neural networks Credit: MIPT press office

There are a number of physical effects that can be exploited to design memristors. In this study, the authors used devices based on ultrathin-film hafnium oxide, which exhibit the effect of reversible electrical breakdown under an applied external electric field.

Most often, these devices use only two different states encoding logic zero and one. However, in order to simulate biological synapses, a continuous spectrum of conductivities had to be used in the devices.

"The detailed physical mechanism behind the function of the memristors in question is still debated. However, the qualitative model is as follows: in the metal–ultrathin oxide–metal structure, charged point defects, such as vacancies of oxygen atoms, are formed and move around in the oxide layer when exposed to an electric field. It is these defects that are responsible for the reversible change in the conductivity of the oxide layer," says the co-author of the paper and researcher of MIPT's Laboratory of Functional Materials and Devices for Nanoelectronics, Sergey Zakharchenko.

The authors used the newly developed "analogue" memristors to model various learning mechanisms ("plasticity") of biological synapses. In particular, this involved functions such as long-term potentiation (LTP) or long-term depression (LTD) of a connection between two neurons. It is generally accepted that these functions are the underlying mechanisms of memory in the brain.

The authors also succeeded in demonstrating a more complex mechanism – spike-timing-dependent plasticity, i.e. the dependence of the value of the connection between neurons on the relative time taken for them to be "triggered." It had previously been shown that this mechanism is responsible for associative learning – the ability of the brain to find connections between different events.

To demonstrate this function in their memristor devices, the authors purposefully used an electric signal which reproduced, as far as possible, the signals in living neurons, and they obtained a dependency very similar to those observed in living synapses.

These results allowed the authors to confirm that the elements that they had developed could be considered a prototype of the "electronic synapse," which could be used as a basis for the hardware implementation of artificial neural networks.