A new deal for the smartphone industry?

Yole Développement (Yole) expects a smartphone market volume CAGR of 6.4% between 2015 and 2021 and projects the market will attain a value of $420bn by 2017. In its latest MEMS & Sensors report titled Sensors for Cellphones & Tablets 2016, Yole proposes its vision of the past and future evolution of sensor technology in the highly competitive and valuable smartphone market. 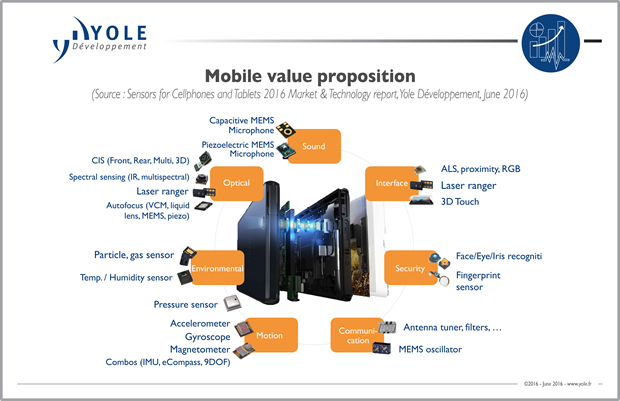 “Apple is under pressure,” comments Guillaume Girardin, Technology and Market Analyst at Yole. “Sales of iPhones decreased from 108.7 million units in the first half of 2015 to 91.6 million units in the first half of 2016. There has never been a situation like this since the launch of the first iPhone.” Apple will partially unveil its mid-term strategy at its event on September 7th. The company can no longer hide behind macroeconomic excuses and now claims that competition has hugely increased, especially from Chinese players. That is reflected by Huawei’s impressive 20% growth in 2016 and its potential of 120 million units by the end of the year, which is beginning to steal Apple’s thunder. Even Apple’s nearest rival, Samsung, seems to have better momentum, powered by lively sales of its flagship S7.

The smartphone market is still fierce but may now have completed its first evolutionary phase, now facing low interest from consumers and flattening sales in the main regions worldwide after years of insane growth. Sensors, and especially MEMS devices, which were at the heart of the revolution, may restart the market in coming months, giving previously unsuspected capabilities to smartphones. Yole, “More than Moore” market research and strategy consulting company, proposes an up-to-date analysis of the latest news.

While many fear a general slowdown due to smartphone market saturation, Yole’s forecast is rather optimistic when it comes to sensors. Driven by the expansion of the smartphone category over other phones and new applications, the sensor industry for cellphones and tablets is expected to grow at a 9.5% CAGR from 2015 to 2021. The market was worth $12bn in 2015, and will reach $21bn by 2021.

Among the wealth of products detailed above, Yole’s analysts believe that capacitive or piezoelectric Micromachined Ultrasonic Transducer (pMUT)-based fingerprint technology, 3D cameras and microphone sensors are the most likely to evolve and grow in the next 5 years.

According to Yole, 3D cameras will be a game-changer in the smartphone industry in coming months and years. 3D cameras are low-cost sensors that can enable the growth of a long list of applications. For example, by leveraging 3D sensing technology, it is now possible to transform live video call experiences on Facetime and other Skype imitators. The ability to remove backgrounds, create avatars and look callers in the eye using a VR headset has the potential to be truly transformative.

There are also opportunities for new products like gas sensors and Infra-Red (IR) or multispectral imaging to penetrate the market, stand out from competition and offer a better value proposition in fragmented markets. Better sound quality, simplified interfaces, enhanced security, accurate positioning and environment monitoring are use cases and value propositions that will have an impact on the market. With the saturation of the smartphone market, it will become extremely difficult for incumbent players to increase sales, and the only way to go might be to significantly reimagine the use of smartphones.

All of this could potentially lead to a reordering of the major players in the sensor market, and today, the real question is which technology or sensor could present a key advantage over the competition today. Could new sensors open up new applications and boost sales?

Read more
Memory
Applications are driving the long-term growth of memory
Sensors
3D sensing in smartphones is pushing the VCSEL industry
Sensors
What is the current status of the MEMS pressure sensor industry?
Sensors
How will radar sensor technology shape the cars of the future?
Sensors
Automotive magnetic sensor industry to be worth $2.5bn by 2022
Sensors
Sensing changes in the automotive sensor market
Power
SiC technologies expected to keep increasing in 2017
Micros
Audio market expected to be worth $20bn in 2022
Power
MOSFETs market recovered in 2016
Sensors
Are sensing technologies impacting our future?
Analysis
What is the status of the CIS industry today?