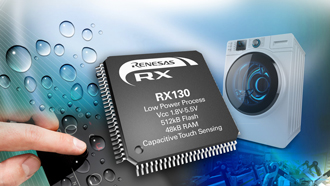 Improved robustness of the touch sensor makes the Renesas RX130 microcontroller family, now available from Rutronik, especially suitable for use in wet environments such as kitchens and bathrooms. The newly integrated capacitive touch sensor features improved sensitivity and noise immunity and operates better in wet conditions.

It offers greater responsiveness for touch-based applications while also enabling the use of touch keys in wet environments and on non-traditional materials such as wood.

They are fully compatible with the company's RX231/RX230 touch MCUs.

The RX130 MCU group is compliant with safety standard IEC/UL60730 for consumer electronics. It is suitable for household appliances with touch panels and can also be applied in the industrial sector.

There are two kits for the MCUs. The starter kit enables full evaluation of the controller and features a self-contained E2 on-chip debugger with capacitive touch sliders and keys.

The kit can be used as a reference tool when developing boards or software and enables simple prototyping.