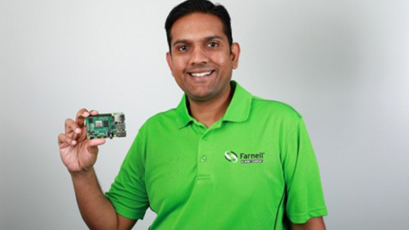 Raspberry Pi 4 has arrived and it is three times faster and boasts more memory capacity than its predecessors taking into compute-intensive embedded applications such as computer vision and Artificial Intelligence (AI). It will also appeal to traditional Raspberry Pi fans including general desktop computer users, hobbyist and makers.

The Raspberry Pi 4 Model B runs on a quad-core ARM Cortex-A72 64-bit processor clocked at 1.5GHz. Video and Sound are supported by two micro HDMI ports support dual-display output at resolutions up to 4K.

A SuperSpeed USB 3.0 delivers faster transfer rates to mass-storage devices (up to 5 Gbps) and true Gigabit Ethernet connectivity delivers network data rates of up to 1Gbps.

Modular compliance certification allows the board to be designed into end products with significantly reduced compliance testing, improving both cost and time to market.

There are 1GB, 2GB and 4GB LPDDR4 memory options.

Raspberry Pi Trading Chief Executive Eben Upton commented: “The extra power and range of memory options support the needs of professional design engineers. AI and machine learning data can be processed right on the board, reducing the need to send data to the cloud and addressing real-world concerns about privacy. And of course Raspberry Pi 4 Model B can be used as a desktop computer, with a powerful processor, multimedia acceleration and dual-display support.”

“Makers can supercharge their projects with greater processing power and several memory options, alongside the same usability and support they are familiar with from earlier versions. It’s the best Raspberry Pi Computer we’ve ever made and we are excited to build upon our strong relationship with Farnell with this launch,” added Upton.

“The new Raspberry Pi 4 Model B Computer provides our customers with a faster, more powerful and more feature-rich single board computer than ever before. This board delivers a real jump in capabilities and addresses the needs of the growing market for Raspberry Pi – from makers to professional design engineers, to consumers looking for a desktop computer. This truly is a Raspberry Pi for everyone,” saysHari Kalyanaraman, Global Head of Single Board Computers at Farnell.

“Our research has highlighted the widespread use of Raspberry Pi products by professional engineers in both prototyping and commercial production; across a wide range of applications from IoT, AI, and industrial automation and control, to predictive maintenance. With more memory options, true Gigabit Ethernet, USB 3.0 and increased processor performance, all at an attractive price, the new Raspberry Pi 4 Model B is well positioned to accelerate its adoption for industrial applications,” added Kalyanaraman.

He continued, “As a desktop computer, the Raspberry Pi 4 Model B Computer provides performance comparable to entry-level x86 PC systems, with an exceptional video and multimedia experience, and is capable of quickly downloading and running 3D games. Users can purchase the entry-level 1GB model for $35, but will see improved performance in memory-intensive applications such as web browsing from the $45 2GB and $55 4GB models.”

The Raspberry Pi 4 Model B Computer will remain in production until at least January 2026. Also available alongside the Raspberry Pi 4 Computer is a brand-new case and a range of accessories including power supplies and micro HDMI cables.

The Raspberry Pi 4 Computer is available now from Farnell across EMEA and CPC in the UK, and Newark in North America.