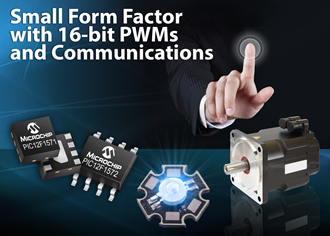 Announced at embedded World 2014, the PIC12(L)F157X family signals an expansion of Microchip's 8-bit PIC MCU portfolio. The MCU family features multiple 16-bit PWMs with an assortment of analogue peripherals and serial communications in an 8-pin package.

Thes three 16-bit PWMs have incorporated independent timers, for applications where high resolution is needed, such as LED lighting, stepper motors, battery charging and other general-purpose applications.  In addition to standard and centre-aligned PWM output modes, the peripheral also has four compare modes and can serve as an additional 16-bit timer.

The devices' CWGs, in combination with the 16-bit PWMs, can be used to create half-bridge and full-bridge drive control. The CWG is a powerful waveform generator, which can generate complementary waveforms with fine control of key parameters such as polarity, dead band and emergency shutdown states. It provides a cost-effective solution, saving both board space and component cost when driving FETs in motor-control and power-conversion applications.

The CWG and 16-bit PWMs are Core Independent Peripherals which, when coupled with the 10-bit ADCs, comparator and 5-bit DAC Analogue Peripherals, enable closed-loop feedback and control. The PIC12F157X MCUs are suited for a wide range of applications, such as indoor/outdoor LED lighting, and RGB LED colour mixing; consumer applications such as electric razors and radio-control toys; and automotive interior LED lighting.

The PIC12F1572 enables communication with an EUSART, at the lowest price-point in the PIC MCU portfolio. The addition of the EUSART enables general-purpose serial communication and LIN for automotive and industrial control. Using the company's capacitive mTouch sensing technology, the integrated 10-bit ADCs enable human-interface/touch applications. Additionally, the PIC12F157X offers non-volatile data storage via HEF memory. The “LF” versions feature low-power technology, for active currents of less than 35µA/MHz and sleep currents down to 20 nA, which is makes the device suitable for battery-powered applications.