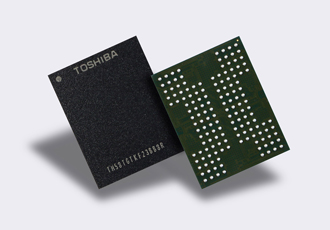 Toshiba Memory has announced development of the what it claims to be the world’s first BiCS FLASH three-dimensional (3D) flash memory with a stacked cell structure. The newest BiCS FLASH device is the first to deliver 4-bit-per-cell (quadruple-level cell, QLC) technology, advancing capacity beyond that of triple-level cell (TLC) devices and pushing the boundaries of flash memory technology.

Multi-bit cell flash memories store data by managing the number of electrons in each individual memory cell. Achieving QLC technology posed a series of technical challenges, as increasing the number of bit-per-cell by one within same electron count requires twice the accuracy of TLC technology. Toshiba Memory has drawn on its advanced circuit design capabilities and industry-leading 64-layer 3D flash memory process technology to create the QLC 3D flash memory.

The QLC 3D flash memory also enables a 1.5TB device with a 16-die stacked architecture in a single package. Samples of this device will be showcased at the 2017 Flash Memory Summit in Santa Clara, California, United States, from 7th to 10th August.