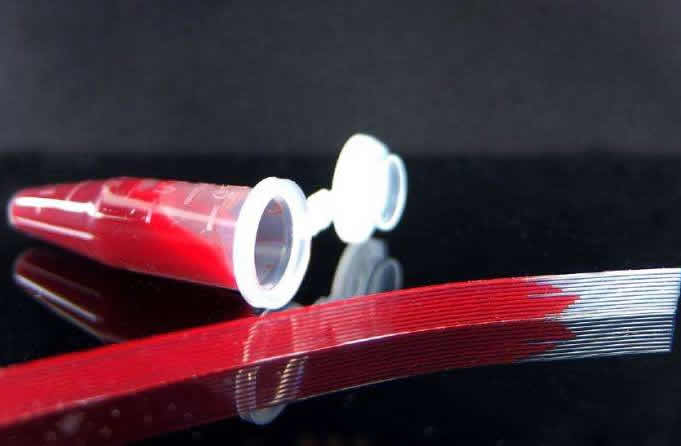 A portable power-free test for the rapid detection of bacterial resistance to antibiotics has been developed by academics at Loughborough University and the University of Reading. The test termed Lab-on-a-Stick is an inexpensive microfluidic strip – comprising of tiny test tubes about the size of a human hair – capable of identifying bacteria found in urine samples and checking if they are resistant to common antibiotics.

Simple to use and cheap to manufacture, the Lab-on-a-Stick is a 'dip and read' method using a transparent microcapillary film suitable for naked eye detection or measurement with portable, inexpensive equipment such as a smartphone camera.

The test, which is at least 12 times faster than current microbiological tests, is the result of research by Dr Nuno Reis, Lecturer in Chemical Engineering at Loughborough University, and Dr Al Edwards, Associate Professor in Biomedical Technology at the University of Reading. The full study has been published in the Lab on a Chip journal.

The study showed that dipstick tests routinely used for testing in a variety of scenarios from soil pH strips for the garden to pregnancy tests, could be updated using the latest approach in miniaturised testing technology to help form the basis of a new generation of advanced, yet affordable, point-of-care tests for global diagnostics.

As part of the study, different cellular tests were carried out to demonstrate the full potential of Lab-on-a-Stick devices for a range of clinical situations:

Anti-microbial resistance – this was measured with E. coli samples typical of common urinary tract infection (UTIs). UTIs can be hard to treat with antibiotics because antibiotic resistance is so common and lab testing takes at least two days.

The assay detects antibiotic resistance – in other words, can the cells grow in the presence of the antibiotic, and how much antibiotic is needed to stop cell growth? This demonstrated the advantage of using the microcapillary film which enables 10 different concentrations of antibiotic per sample to be tested with a single test strip.

The research team are currently optimising this so that the test, which currently requires overnight incubation in a multi-well plate, could in the future be completed in less than two hours in a single test strip.

To identify bacteria, many different tests must be performed on every sample, illustrating again the benefits of microcapillary film which performs 10 tests per test strip. This study demonstrated a four-hour test to distinguish two very closely related bacteria – a harmless laboratory strain of E. coli from a type of Salmonella that causes food poisoning.

ABO blood typing – a simple blood test that takes only two minutes was miniaturised and the results were recorded using an everyday digital camera.

Dr Reis said: "This is a major step towards miniaturising complex, routine microbiological and clinical tests that cannot at the moment be performed outside of the laboratory setting.

"Our secret is simplicity. We have shown how microengineered film material made from a very transparent plastic with special optical properties, makes it easy to perform laboratory tests without lab equipment. Previously, we showed how a portable Lab-in-a-briefcase made it possible to record blood test results with the assistance of a simple smartphone."