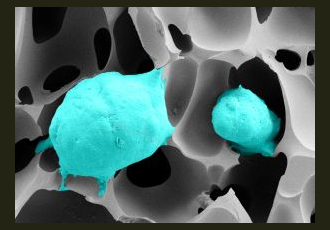 A team of researchers led by Dr. Friederike J. Gruhl and Professor Andrew C. B. Cato at Karlsruhe Institute of Technology (KIT) are developing a three-dimensional model for prostate cancer research based on cryogels. The model will be used to reproduce natural processes and above all to examine the development and the progression of tumors.

A current paper on this project published in the scientific journal Small (DOI: 10.1002/smll.201600683) has been crowned top story of the week on “Prostate Cell News”, a major international platform and database for prostate cancer research.

In the western world, prostate cancer is the most common malign tumor in men. Fundamental research is facing the challenge of examining the progression of the disease from the trigger to the formation of metastases, and particularly of understanding the interaction of cancer cells with their environment. To achieve this, the group headed by Dr. Friederike J. Gruhl at the Institute of Microstructure Technology (IMT) is working closely with Professor Andrew C. B. Cato at KIT's Institute of Toxicology and Genetics (ITG) to develop a biomimetic system, in other words a cell culture model for recreating human prostate cancer in vitro. Cryogels are used as the base material. In this case, they are made of synthetic polymers which can be put together to form three-dimensional porous structures due to the formation of ice crystals from trapped water. The mechanical properties of these structures are very similar to those of natural cell tissue. Since October 2012, the state of Baden-Württemberg has been funding the “Development of a 3D prostate model for cancer research” project with €200,000, which is part of the “Development of Alternative Methods to Avoid Animal Experiments” programme.

A paper on the prostate model, Superporous Poly(ethylene glycol) Diacrylate Cryogel with a Defined Elastic Modulus for Prostate Cancer Cell Research, has recently been published in the Small journal which deals with micro and nano sciences. Because of the paper's current and relevant nature, the “Prostate Cell News” platform selected it to be its top story of the week. The publication outlines results from Bettina Göppert's dissertation, a doctoral candidate at KIT's IMT. It was created in close collaboration with Professor Andrew C. B. Cato and his team at the Institute of Toxicology and Genetics (ITG), and with the help of methods that were developed at the Institute of Functional Interfaces (IFG, Thomas Sollich) and by the ANKA Synchrotron Radiation Source team (Professor Tilo Baumbach, Dr. Angelica Cecilia).

“The paper covers the implementation of the model and shows that it is a long-term stable tissue-like 3D cell culture system, with the help of which hormone-independent prostate-specific gene expression could not only be achieved, but even be reinforced compared to conventional 2D models,” said Dr. Friederike J. Gruhl. This was shown by the cultivation of androgen-sensitive prostate cancer cells (LNCaP). In future, it may be possible to cultivate both healthy cells of the prostate tissue and cancer cells in the 3D cryogel model. This opens up new opportunities for preclinical research and for using it in the clinical development of anti-prostate cancer drugs.