Is your industrial robot efficient enough?

There are many creative ways to save pennies on your energy bill, from placing bricks in the toilet cistern, to cling film over the windows. In manufacturing, saving energy can be a whole lot simpler and making small but significant changes can drastically reduce energy consumption. Three technologies can improve the energy efficiency of industrial robots, as Jonathan Wilkins, Marketing Director at EU Automation, explains.

Manufacturers are introducing more automated systems to the factory floor to streamline the production line and efficiently deliver products to customers. However, as the factory increases its automated processes, it requires more energy to complete production.

With energy efficiency standards becoming stricter, manufacturers aim to reduce carbon emissions across the factory. The introduction of standards, such as ISO 50001, encourages manufacturers to improve energy performance and identify areas where they can reduce energy consumption. Manufacturers can then monitor each asset on the assembly line to determine where they can best save energy. 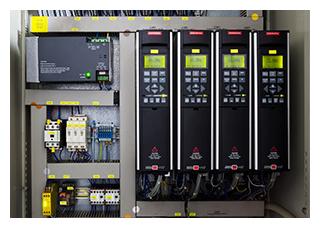 Most industrial machines operate using motors, and around 65% of energy consumption in industry is attributed to these parts.

When monitoring equipment, manufacturers may find that the motors are working faster than required and might even be running when the machine is not in use.

Installing a variable speed drive (VSD) is the best way to reduce motor speed to align with production. This equipment regulates speed and force of an electric motor to adjust the speed based on that of the assembly line. Using this technology prevents unnecessary energy consumption when the machine is working at a slower production rate.

EOT
It is a common misconception that only new equipment will be energy efficient. However, manufacturers that use older equipment also have the opportunity to reduce energy consumption. While obsolete parts are no longer produced by the original equipment manufacturer (OEM), it does not mean that they are not energy efficient.

Some industries, such as the pharmaceutical sector, rely on obsolete parts to keep systems running but also want to ensure that their processes are cost and energy efficient. Technology is advancing quickly, meaning that parts can easily become obsolete. Many of these parts meet current energy efficiency standards, despite no longer being produced, meaning that manufacturers can use them, rather than replacing an entire system.

Relying on parts suppliers can ease the process of sourcing obsolete equipment, as it can be difficult to find the correct component. Using obsolete parts allows manufacturers to optimise their current system, rather than replacing it. Sourcing obsolete also promotes a circular economy as parts are given a longer lifecycle, rather than being disposed of in a landfill.

Software
It is important for robots to run efficiently and use only the required power. However, if the software programming is not frequently updated, the machine will still use excessive amounts of power.

Introducing new software can also improve the energy efficiency of a robot. Manufacturers can monitor and manipulate any asset by creating a digital twin using real-time analytical data. The manufacturer can then determine if the machine is using excessive energy and try to solve the issue using the digital twin before adapting the physical machine, efficiently reducing energy consumption.

These technologies ensure that manufacturers can run efficient machines, providing the best products to customers at the lowest cost and with little impact on the environment. Manufacturers can then save money on utilities bill without the need for bricks in the cistern.