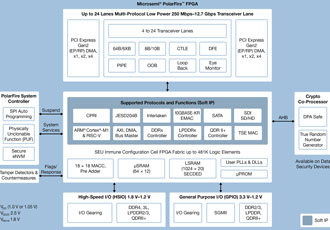 Tamba Networks’ Ethernet MAC is half the area and twice the speed of competing Ethernet MACs, providing Microsemi customers with lower costs due to its size optimisation in addition to the high security and capabilities of PolarFire FPGAs.

As part of its collaboration with Tamba Networks, Microsemi used the company’s Interlaken and 10G/40G Ethernet MAC soft cores as key building blocks to evaluate and enhance PolarFire FPGAs’ fabric architecture, with 10G and 40G datapaths running at 160 and 320MHz. These cores offer low gate count and latency, with high flexibility. When combined with Microsemi’s low power fabric and low power transceiver, Tamba Networks’ 10G Ethernet soft core lowers the power of a 10G datapath by 50%. The device is also available as a direct core from Microsemi’s IP library.

“One of the priorities in designing PolarFire FPGAs was to offer the lowest power, cost-optimised 10Gbe solution for our customers,” said Ted Speers, Head of FPGA product architecture and planning at Microsemi. “Working with Tamba Networks provided us access not only to optimal encoding modules to integrate into the device, but also its small 10G Ethernet MAC optimised for frequency and easy-to-close timing at both 160 and 320MHz. While PolarFire FPGAs are ideal for multiple markets, the FPGA-based Ethernet solution is particularly suitable for demanding communications and defense applications.”

According to the IHS Ethernet Switch Quarterly Market Tracker, the number of 10G ports is expected to grow from 32 million ports in 2016 to over 100 million ports by the end of 2021. The Ethernet switch market was approximately 7.2 million in 2016 and is forecast to grow to 12.3 million in 2021, with 10G contributing approximately one third of all Ethernet switching revenue today.

Microsemi’s PolarFire FPGAs are particularly beneficial to the access segment of the communications infrastructure market, where original equipment manufacturers (OEMs) are working to deliver more bandwidth to customers while reducing capital and operational expenditures. Tamba Networks was deeply involved in the development of the PolarFire transceiver’s physical coding sublayer (PCS), providing the 64b66b/64b67b encoding modules used for Ethernet and Interlaken. In addition, the company helped Microsemi modify the 64b66b encoder to operate with deterministic latency, ensuring support for Common Public Radio Interface (CPRI) options 7b, 8 and 9.

“We were pleased to collaborate with Microsemi on its mid-range PolarFire FPGAs by providing the industry’s lowest latency, power and size solution for Ethernet MAC and PCS cores as well as Interlaken communication protocols to help differentiate these devices,” said Soren Pederson, President of Tamba Networks. “Being intimately involved in the development of PolarFire’s hard PCS layer resulted in a unique 10Gbe solution providing the power efficiency, compact size and deterministic latency necessary for Microsemi customers’ growing application requirements.”

Microsemi’s PolarFire FPGAs, launched in February, are designed to rethink how the industry has traditionally viewed FPGAs with mid-range densities, as the devices are the first non-volatile FPGAs providing more power and cost savings in comparison to SRAM FPGA solutions with 10G transceivers, advanced input/output (I/O), high security and digital signal processor (DSP) capabilities. Microsemi also sells a comprehensive portfolio of Ethernet switches and PHYs, which customers can use to add switching functionality and/or MAC-layer security (MACsec) encryption with nanosecond IEEE1588 timestamping capabilities to PolarFire designs.