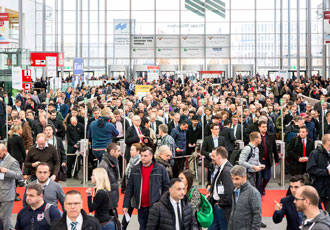 Do you ever wonder where the electronics industry is heading? Well this year’s productronica was definitely a clear indication. The event which was held this week from 14th-17th November in Munich, provided answers to that question, as 1,200 exhibitors from 42 countries presented innovations from the fields of electronics production and development.

The focus was on topics such as the Internet of Things, as well as big data and miniaturisation. Among other things, the special shows ‘Smart Data—Future Manufacturing’ and ‘Hardware Data Mining’ staged by the VDMA and Fraunhofer IZM showcased various scenarios: from the impact of sensors on production machinery to the use of large quantities of data for new business models.

Falk Senger, Managing Director of Messe München, can look back at four successful days: “productronica impressively demonstrated its position as the world’s leading trade fair and global innovation platform this year. With an enormous surge in the number of visitors, as well as a sharp increase in international ones, productronica 2017 showed that Munich is the world’s hotspot for electronics manufacturing.”

Rainer Kurtz, Chairman of productronica’s Technical Advisory Board and CEO of kurtz ersa, endorsed that view: “productronica confirmed the positive growth forecast for the industry. The great interest in smart technologies shows that digitalisation has finally arrived in the electronics manufacturing industry. Now we need to keep this momentum going.”

Thilo Brückner, Managing Director of VDMA EMINT, also expressed his great satisfaction: “productronica was yet again a very successful trade fair for the VDMA and its member companies. The exhibitors reported many promising, high-quality contacts and confirm the positive underlying sentiment in the industry.”

According to a survey by the market research institute Gelszus, visitor satisfaction again increased this year, as 97% of visitors gave productronica a rating of good to excellent. In addition, 96% of those surveyed said that productronica met their expectations regarding innovations.

44,000 visitors from 85 countries came to Munich, an increase of almost 20% over the previous event.

The sharpest increase in attendance was in the number of visitors from Taiwan and the US, as well as France and the Netherlands. After Germany, the countries with the largest number of visitors were as follows (in this order): Italy, Austria, Switzerland, France, the Russian Federation, the Czech Republic and Great Britain.