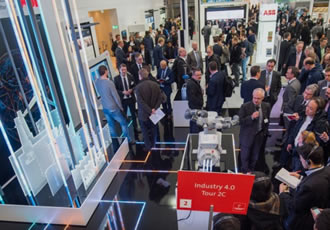 For exhibitors, the one true measure of a trade show’s effectiveness is the number of quality leads it generates, and the subcontractors who exhibit at Industrial Supply are no exception. Based in halls 4 to 6 at HANNOVER MESSE, they enjoy an advantage: cross-industry reach. They benefit from the ability to generate added leads in industries they had not even dreamed of targeting.

This is a plus factor that Industrial Supply, the trade fair for subcontracting solutions and lightweight construction, is able to offer because it is part of HANNOVER MESSE, the trade fair for industrial technology in Hannover, Germany. It’s all about the location. Subcontractors offer technologies that have cross-industry applications. Industrial Supply positions those technologies right under the noses of key users from multiple industries.

Plus there’s another important selling point: Industrial Supply’s audience literally comes from all around the world. For instance, in 2016, 36% of the show’s trade visitors came from outside Germany. “At HANNOVER MESSE we encounter many international customers who would normally be very difficult for us to reach,” explained Ulrich von Tippelskirch, the CEO of German plastics manufacturer Jäger Gummi und Kunststoff. The show also generates valuable leads from a diverse range of industries and backgrounds. “We find ourselves talking with technicians and design engineers – valuable contacts who are generally not part of our primary target group,” reported Sven Burmeister, Head of Marketing, Communication and Trade Fairs at REYHER.

Time-saver for purchasing managers
Dr. Silvius Grobosch views Industrial Supply from a purchasing manager standpoint. He is, after all, the deputy chair of the German Association for Materials Management, Purchasing and Logistics (BME), an organisation that runs a number of specialist events at HANNOVER MESSE every year, including the BME Buyers’ Day. “I’m pleased to say that in 2016 these channels once again generated a large number of new leads for us,” he said. “Over 150 experts from purchasing, supply management and logistics took part in our various events. That also meant that our leadership was able to network with many potential new BME members.” For Grobosch, the key advantage of the Industrial Supply show is the great diversity of allied industrial processes and materials on show there. “Whether it’s providers of enabling technologies or hidden champions, the sheer range of companies represented at Industrial Supply is a huge plus. There’s simply nothing like it at competing events,” he said. “Having such a large number of innovative and highly relevant suppliers all at the one location is extremely efficient because it saves buyers a lot of time and effort.”

The move represents an intensification of the multidisciplinary environment that has long attracted surface technology exhibitors to HANNOVER MESSE. “We have benefited almost every year from incidental business with visitors whose primary reason for attending HANNOVER MESSE was something other than surface technology,” commented Holger Weidmann, CEO of the German surface technology provider Krautzberger. “Many of these visitors seize the opportunity to learn about the latest developments in surface technology once they have visited the display areas that brought them here in the first place. We also benefit from HANNOVER MESSE’s strong international appeal. In 2015, for example, about 30% of our leads were with non-German companies. As a mid-sized company, we don’t have the resources to maintain a presence in all of our target markets, so we really like the idea of having potential customers come to us in Hannover.”

Hub for economic and political dialogue
Together, this international reach and multiple-industry coverage make HANNOVER MESSE a magnet for political and economic leaders, which is another key benefit. “At Industrial Supply and the wider HANNOVER MESSE, we mainly tend to encounter the kinds of economic policymakers that you just don't get at other trade fairs,” commented Frank Seinsche, Head of Corporate Design and Events at European steelmaker Salzgitter. “This is very important for us, for it gives us the chance to reach policymakers and convey our stance on key issues such as punitive tariffs on Chinese steel imports and challenges in connection with the prevailing energy requirements,” he added.

HANNOVER MESSE
The trade fair for industrial technology will next be staged from 24th-28th April 2017 in Hannover, Germany. With its core focus on 'Integrated Industry – Creating Value,' HANNOVER MESSE is a showcase for the digitalisation of production (Industry 4.0) and energy systems (Integrated Energy). The upcoming HANNOVER MESSE will feature seven parallel shows: Industrial Automation, MDA – Motion, Drive and Automation, Digital Factory, Energy, ComVac, Industrial Supply and Research and Technology. Poland will star as the Partner Country of HANNOVER MESSE 2017.